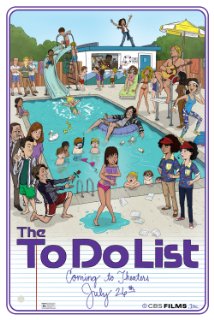 For some reason I’m finding it very difficult to write this review. My computer is ready to go (in other words, Minecraft isn’t running). I’ve got a cold beverage (water). I’ve got some good writing music playing (Queen’s “A Night at the Opera”). I’ve got my review pants on (which is to say, I’ve got no pants on).

And yet nothing comes to mind. The movie just didn’t really leave much of an impression one way or the other. It was good, not great. Funny, not hilarious.

I am a fan of Aubrey Plaza [IMDB]. Maybe I should talk about her. In this she’s a tightly-wound high-school valedictorian so paranoid about being ill-prepared for college life that she creates an extensive list of sex acts to accomplish over her last summer at home. The script paints her as borderline autistic at times but she puts in a good effort.

I also really loved Clark Gregg’s [IMDB] turn as her long-suffering, conservative father. It’s a small role, but truly one of the most honest and believable in the film. He’s the kind of guy that you may not agree with but know that he’s sincere. Most of the other characters tend to be single-dimensional and talk like they’re in an R-rated “Saturday Night Live” sketch.

There’s not really much that comes to mind about the rest of it. There were some laughs, but nothing that really “sticks”. Most of them were variations on the central theme of treating sex like a test to be studied for. It’s not a bad idea but it was worn pretty damn thin by the end. Most of the rest relied on a kind of bland raunchiness that amused but didn’t entirely satisfy.

If you’ve got nothing better to do, what the hell? Give this a shot. It might be right up your alley. Then again you might just find it cringe-inducing and awkward. It’s funny like that (but not in many other ways).