Cleaning out the attic and found this little hybridized technological bastard from 18 years ago. WebTV (later bought out by Microsoft and rechristened “MSN TV”). I originally purchased it to do interface and human-factors testing for some or another client. If I remember correctly I think was set up for, maybe, a week?

The box attempted to provide a full-featured Web browsing experience on your television. Your old, standard definition tube television. With an IR remote. Over a slow modem on a slow platform with a slow browser.

Yeah, it didn’t work all that well. The unit reformatted web pages on the fly for larger, more television-friendly text and a whopping 544-pixel width (always, as there was never any horizontal scrolling on the WebTV’s proprietary browser). Pictures were compressed to the point of obliteration and color palettes bizarrely realized even on good TVs. 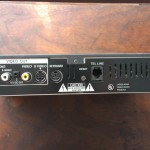 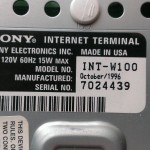 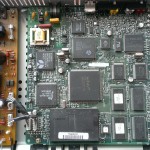 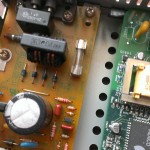 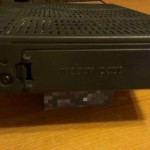 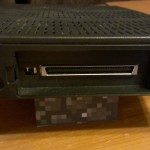 WebTV was officially launched on September 18, 1996. This particular unit, a Sony INT-W100, was manufactured in October 1996 (which, incidentally, means that I’ve had it just a few months less than I’ve had my wife). The unit was $349 U.S. at lunch and sported an anemic (even then) 112 MHz MIPS CPU, two megabytes of RAM and ROM and one megabyte of Flash memory. The service – delivered over 33.6 kbit/s dial-up – cost a cool $20 a month.

I couldn’t actually get this particular box to work (I had lost the remote along the way someplace) but as the service was finally shuttered last September I don’t think there would be much to see even if I had.