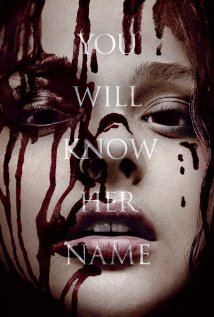 In this dark, but very confused, sequel to the 1996 family classic “Matilda” [IMDB] we see our precocious heroine several years later. Much of the confusion is due to the fact that, due to some ill-defined problem, Matilda and her adoptive mother, Miss Honey, have been forced to move and change their names. This transition is made more confusing by the cast changes.

Matilda, the role Mara Wilson [IMDB] made famous, is now “Carrie” and the role has been given to the excellent actress Chloë Grace Moretz [IMDB] (presumably due to Mara’s retirement from film). Miss Honey, formerly played by Embeth Davidtz [IMDB], nows goes by the name “Margaret White” and is played by Julianne Moore [IMDB]. This is clearly an attempt to bring more star power to this unusual sequel.

The first film ended with all of Matilda’s problems solved as a result of her emergent telekinetic powers. Her and Miss Honey were able to settle into a comfortable, happy life where she found little need for her gift. Likely as a result of the abuse she received as a child, Miss Honey-now-Margaret has had a psychotic break and descended into a delirium of extremist religion and isolationism. As the sequel begins Matilda’s (now Carrie’s) powers have waned and are, likely due to the new stressors, resurfacing.

Margaret’s psychological problems have resulted in Carrie becoming an outcast at school and tormented by her classmates. As an apology for an embarrassing incident she is invited to prom, but is also targeted for revenge by the leader of a popular clique. When that revenge takes a cruel and degrading form all of the pain and suffering that Carrie faced in her former life as Matilda is released in a blind murderous rage.

It’s an odd choice to take the sequel in such a disturbing direction. I find it hard to fault the actors, all of whom do fine work, for problems with creative decisions, but a more traditional family film would have clearly been a better choice. It may be that the creators assumed that fans of the original have matured and would prefer a darker, more adult story. This seems to overlook the fact that those fans may now have children of their own now that they would prefer to share the story with.

I watched the original and this sequel with my eleven year-old daughter. While both did provide her with a strong female lead and a sense of empowerment, I felt the message of the sequel was simply too far afield of the original. As a stand-alone film this may have been a decent horror flick – but as a sequel it’s hard to consider it anything but a failure.