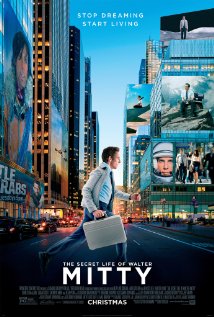 “The Secret Life of Walter Mitty” on IMDB

This isn’t an adaptation of James Thurber’s classic 1939 short story. The story, as wonderful as it is, would make for a terrible movie. Its charm, and genius, is that the main character does literally nothing exciting. It’s an amazing literary work but would be wholly unsatisfying as a film. Nor is it a remake of the 1947 Danny Kaye [IMDB] classic. That film, wonderful and timeless as it is, is a product of its time and simply wouldn’t translate well into a modern film.

The movie is framed around the fictionalized last days of “Life” Magazine. Walter (played by Ben Stiller [IMDB], who also directs) is a “Negative Assets Manager” (managing film stock) who has lived vicariously through one of the magazine’s acclaimed photographers, Sean O’Connell (Sean Penn, [IMDB]). When an enigmatic negative promised to be “the quintessence of life” and perfect for the last issue’s cover goes missing, Walter is thrown into the adventure of his life.

Call the movie “inspired by” the story, then. Call it a homage or a reinterpretation. Do whatever you have to do to get over whatever baggage about the title you have. It would be a shame to let this movie get ruined by something so silly.

The look of the movie reminds me, in only positive ways, of Wes Anderson’s [IMDB] best work. Starkly framed with bold horizontal lines and a beautiful pastel palette the cinematography carries you gracefully between the scenes. An oddly photographic sense of frame and camera positioning continually create small, but gorgeous moments. Great care is taken to highlight small details. Many scenes are enhanced by delicate effects work and many layer in the thoughts and messages driving Walter creating a multi-sensory experience that will absolutely benefit from multiple viewings.

The visuals are enhanced by an excellent and uplifting soundtrack. It’s worth noting the care taken here as well: when classic music is used (such as the seminal “Space Oddity”) the original (and comfortable) artist recording is used. Some of the music has been used before and much of it is performed by artists native to the locations Walter visits. Like much of the film the music may be accused of being clichéd, but that’s a simplistic assessment. Something doesn’t have to be wholly original to be good.

Walter’s daydreams remain intact and provide much of the early action. They’ve been modernized, of course, but reach a level of subtle absurdity that should immensely please fans of Stiller’s previous work. The sequences are fun and often hilarious but are marked by an inherited, often plagiaristic, sensibility. They’re drawn from Walter’s environment, conversations he’s hearing or other media. Exactly as they should, they ring false.

The daydreams recede gradually as Walter’s real-life adventures become more grand. These scenes have a softer, generally more grounded, presentation while the cinematography becomes more open and expansive. “The real world is a big place!” they seem to shout. The experiences are real and therefore more meaningful. They’re not allowing Walter to temporarily escape the blandness of his existence, but actively making his existence less bland. The difference is subtle but the movie understands it well.