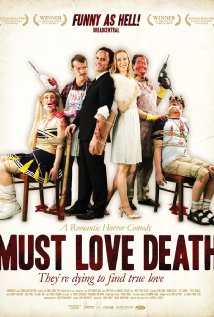 “Must Love Death” on IMDB

The idea is sound. A guy who has been spurned by love decides to kill himself, but is too cowardly to do it. So he finds a group of like-minded people online and meets them in a remote cabin in the hopes that group suicide will be easier.

He learns the hard way that you just shouldn’t trust people that you meet on the Internet. We see his romantic misadventures in played out in a series of flashbacks as his current imminent risk of death makes him question his desire for it in the first place.

The problem is that the two concepts never really mesh. We get a little bit of horror movie, then a little romantic comedy. The former is decent enough, if rough around the edges, while the latter is weak and uninspired. The two stories pivot around the same characters but only come together, poorly, at the absolute end. Both suffer from pacing and tone issues that keep the audience more confused than interested. There are also subtle, but persistent and noticeable, issues with foreign actors failing to deliver English lines.

If you’re a bargain hunter, this might be for you: two bad movies for the price of one!