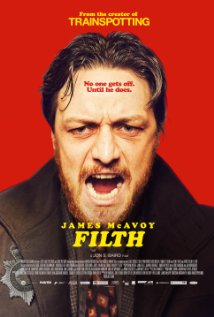 Some films chronicle a descent into madness. This one tosses you in the middle of it and continually challenges your perception of where rock bottom lies. Boundaries are defined only enough to be ignored and “normal” is something you see on old television programs.

James McAvoy [IMDB] taps deeply into his dark side to play Bruce, a veteran cop in line for a big promotion. Bruce is a winner and methods don’t matter as long as you end up as the one holding the prize. If that means destroying his co-workers lives or lying to get ahead on the big case of the day, so be it.

The movie starts rolling slowly, but always moves downhill and always accelerates. Bruce and his wife enjoy playing mind games: if he wins the promotion, he also wins her. Aggressive office power-plays escalate to character assassination, fraud and adultery. No ploy is too reprehensible, no maneuver too low.

Bruce has drug issues and anger issues and trust issues and, it seems, is chronically impotent despite his excessive sexual deviance. He’s also paranoid, hallucinating regularly and seems constantly on the verge of a psychotic break. His weaknesses make him angry, and he takes out that anger on the few people that still consider him a friend.

McAvoy owns the role. Bruce is utterly despicable and without human value of any kind, but McAvoy is still able to make him pitiable. The constant struggle that Bruce faces, and fails, is agonizing. You yearn for him, just once, to do the right thing. The desperation driving him as his schemes collapse around him is truly disturbing. The performance scrapes like sandpaper; it’s raw and bloody.

Your eyes will be sore when the credits roll, having winced their way through almost this entire film. It’s worth it to see McAvoy at his absolute best, playing the absolute worst.