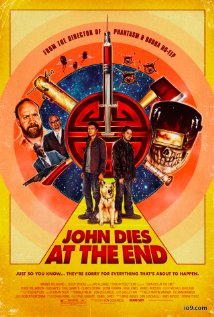 “John Dies at the End” on IMDB

First a disclaimer: I’ve not yet read this book. I meant to to, but the entire population of the universe convinced me to read “Game of Thrones” and I feel like I’ve been in some kind of Sisyphean literature purgatory ever since. It may very well be that the movie completely fails to successfully represent the completely cogent and in no way confusing story. I doubt it, but dammit: it could happen.

The best synopsis I can offer after watching it twice, is that a lot of freakishly interesting ideas are strung together within a slurry of tentacle arson hallucinogen murder alien dimension slug body-snatching-fluff dog amputee monster death boob ghost paranoia heroic carnivorous-mustache apathy. Oh, and Clancy Brown [IMDB] is in it; for a little bit. He’s awesome.

Technically, things are hit and miss; hitting the entire range of the bell curve. Most of the effects are average, a few are good and some are laughably, horribly bad. Acting is the same. There are a couple of great performances, several purely adequate ones and a few horrible ones. Some scenes are downright impressive, others look they were pulled from 1970’s sci-fi TV.

There’s definitely some genius here; more than enough to carry you through the weak spots. What there isn’t is any cohesion. You just have to sit back and let the movie wash over you. Trying to fight it could result in severe mental damage.