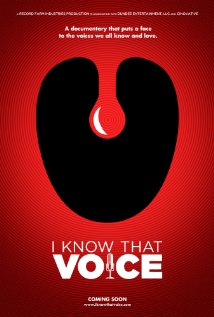 “I Know That Voice” on IMDB

Not so many years ago, voice actors were relegated to Saturday morning cartoons, vocational films and the occasional hand-drawn feature. In the past two decades, however, there’s been an explosion in the need for qualified talent.

Dozens of television channels are hungry for new animation for all ages. Foreign animation, especially from Japan, needing English dubbing, has seen a huge surge in popularity. Advancements in computer animation means that every major studio is pumping out family friendly features as quickly as they can approve the scripts. Low cost CGI also brings us more animated characters in traditional film and television than ever before. Last, but certainly not least, the enormous video game industry has a voracious appetite for acting talent.

This is a lovingly produced tribute to the men and women that meet this growing demand. Industry veteran John DiMaggio [IMDB], known as Bender from “Futurama”, Jake in “Adventure Time” and literally hundreds of other credits, narrates. His love and respect for his craft, and the people that dedicate their lives to it, is obvious and infectious.

The history of the profession and profiles of some of the pioneers are presented. Dozens of professionals, some with over 50 years experience, are interviewed. Some are dedicated voice artists, others do it as a change of pace and still others just fell into it. Some have happy careers performing a single character or on a single show, while others have seemingly endless credits.

I was most intrigued by the discussion of the craft itself. The almost sculptural process that goes into the creation of a character from various parts and themes. The uncanny ability to then inhabit that character: laugh, sing, whisper, shout, cry out in anguish or sob as them; even imitate other characters as them. Even more impressive, a single actor will often perform multiple characters in the same scene, switching seamlessly between them as needed.

There isn’t a single uninteresting moment. Fans of film or film making will appreciate the frank discussions of the process and methods. Fans of animation or video gaming will be overwhelmed by the sheer volume of hot, liquid awesome.