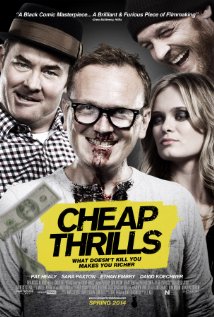 Craig (Pat Healy [IMDB]) is a new father desperately in debt and on the verge of being homeless. He runs into an old friend, Vince (Ethan Embry [IMDB]), and decides to have a few beers. While there they meet up with Colin and Violet (David Koechner [IMDB] and Sara Paxton [IMDB]). It’s Violet’s birthday and rich husband Colin wants to make it memorable.

Fun, but increasingly dangerous, dares for money turn darker as the group gets more comfortable. As the stakes grow the challenges pit the two friends against each other. Craig’s desperation to care for his family becomes more pronounced and old baggage in his relationship with Vince surfaces.

As the night wears on the challenges begin to shatter taboos of all kinds. Emotional betrayal and fidelity are tested. Social mores and, um, “intestinal fortitude” are pushed past their limits. The instinct for self-preservation is forcibly overridden. Things, in a word, get nasty.

Unlike many of the other films in the genre the only motivator here is cold, hard cash. Craig and Vince aren’t being blackmailed or forced to participate against their will. This creates a specific, very effective tension as each audience member internally decides, then reevaluates, “no, that’s where I would draw the line”.

And that’s why movies like this are attractive: they allow each of us to question, in a superficial way, a perception of our own limits. If that’s something you’re looking to do (and you have a strong stomach) then this is definitely worth the time.