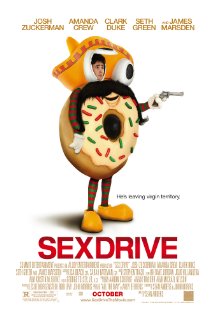 Have you ever experienced that moment when you make a reference to some hilarious movie and all you get is blank stares? Even when you’re positive that you watched the movie with that person? Like you can literally remember sitting in a room with them and watching the specific scene you referenced, but they have no idea what you’re talking about?

Well, that’s what happened to me with this movie, so I sat my lovely bride down and we watched it. Just so I could yell “Rumshpringa!” and get a laugh.

It’s your basic road movie. A doofus almost accidentally convinces a girl in another state to invite him up for sex by pretending to be his football-star, Judge-driving older brother. His inexplicably suave friend convinces him to borrow-without-asking his brother’s car and go. At the last second his best-friend-who-is-not-his-girlfriend invites herself along.

The movie is just as side-splitting hilarious as it is terribly stupid, and it’s very terribly stupid. But it’s also smart in a savant-like way. There are dozens of little jokes just tossed in because, hell, there’s room for a gag there, why-not? Importantly, these are blink-and-you-miss-them kind of things with no attention draw to them and that makes them so much sweeter.

Many comedies are so insecure that they beat you over the head with the jokes, pound them in so hard that you almost begin to feel violated. The jokes are clearly defined and telegraphed. Most are purely verbal, leveraging the skills of whichever stand-up comic is currently hot enough to earn feature dollars. It’s far from the only offender, but did ever see “Your Highness” [my review]? That movie drives every single gag into the earth with a horrifying violence. “Yes”, you’ll say, “that is a Minotaur’s dick, and this is the seventh time you’ve shown it to me.”

This isn’t a deep movie. The plot is straight off the low shelf as are most of the scenarios, but it is a funny movie. More importantly, I can now yell “Rumshpringa!” at inappropriate moments and get a laugh from my bride.