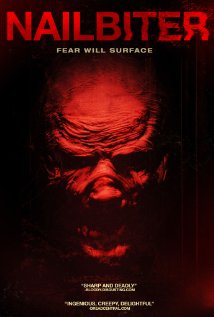 This low-budget thriller ups the ante by focusing on a trapped mother and her three daughters. She was taking the teens to pick up their father, back from an extended tour of duty in the Middle East. They’re forced to seek shelter in the basement of a nearby farm house when a tornado forces them off the road. It’s only when they try to get out that they realize their safe harbor is actually a prison; one guarded by terrible, predatory creatures.

The movie tries to create a “creature culture” to explain the creatures, but is never completely successful in doing so. Unlike the richly detailed Jug Face [My Review], it’s never able to paint a compelling picture of the creatures and how they live among us. One reason is that much of the film is from the trapped family’s point-of-view; this means less time to explore the mythology that might have otherwise been built.

What we get is a werewolf vibe with high-pressure weather events taking the place of the moon. Most of what we learn is from the matriarch of the family and her older son, who seems to have more control than the others. The visual effects are simple, but effective. I was disappointed in much of the audio work, however. Many of the sins forced upon filmmakers by low budgets can be partially overcome by giving more attention to the audio work. The various grunts and growls heard here feel cheap and generic.

Positively, the movie is quite good and setting tone and building tension. It also treats the trapped women with a healthy respect that’s often missing from low-budget offerings. There’s no gratuitous nudity or unreasonable emotional break-downs. These are not passive damsels in distress, but people under pressure actively trying to make sense of their situation and escape it.

After spending so much time building up tension, it stumbles through the ending. A blatant attempt to set up a sequel kills the climax and then just trails off sheepishly. While the movie is actually good enough to warrant a sequel, in my opinion, the hook given is overly needy and ham-fisted.

Overall this is a good horror/thriller; good enough, at least, to rise above its several missteps and still get a recommendation from me. If absolutely nothing else, it’s refreshing to see talented actresses used as more than eye-candy and monster bait.