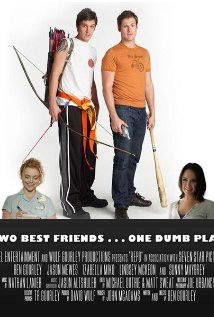 Our hero, Leon (played by writer and director Benjamin Gourley [IMDB]), is a good-natured schlep who just can’t seem to find Miss Right. His best friend and partner, T.J. (the often under-appreciated Jason Mewes [IMDB]) thinks what he’s doing is helping, but it’s truly not. Together they work as repo men, but T.J. has a crackpot scheme to rake in some real cash. Leon strikes up relationships with two women, at least one of which gets much weirder than it should. He also works as the super of his apartment complex and there a large collection of eccentrics to deal with there. Did I mention the gangsters yet? Well, there are gangsters and some missing money as well.

See what I mean about “too much going on”?

Any one of these plots could have carried the entire movie and most of the gags. All together they blend into white noise. There are also a few instances of lazy writing that grind. Situations where the only reason they proceed as they do is because somebody inexplicably fails to say something obvious or does something totally out of character.

Obviously there’s some good here too (or it wouldn’t be so very average). Mewes, as always, is a force of nature. What he lacks in range, he makes up for in pure adrenaline. There’s also a sweet, sadly under-developed love story between him and him wife (Keili Lefkovitz [IMDB]), that’s significantly more believable than the main one. Some of the side-characters rise to the challenge and carry some of the slower segments.

It may be a back-handed compliment to to praise a movie for not falling completely apart at the end, but there you go. It starts out “acceptable”, barrels through “passable” and ends up squarely on “fine”.