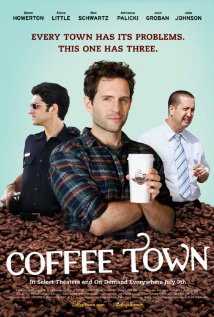 Luckily, very little of this movie is about coffee; I never did like the stuff. That doesn’t stop people from trying to get me to like it. They’ll say, “It’s an acquired taste!” as they stare glassily and talk about “beans” and “pods” and French things.

I’ve never really understood the idea of an “acquired taste”. I suppose if you were lost in the Siberian wilderness you might have to acquire a taste for polar bear left overs, but that’s simple survival. With coffee, people are saying: you know that thing you hate, costs way too much and would force you to join a really annoying subculture? Why don’t you keep choking it down until it doesn’t make you want to vomit?

In any case, the movie isn’t about coffee. It’s about coffee shops. Specifically the culture of those that work in coffee shops. Not the baristas, waitresses and clerks that actually work in coffee shops, but the paying customers that bring in their laptops, connect to the free wi-fi and set up shop. Those that sit there, stretching out their six-dollar beverage for hours while jockeying for the best tables and strongest signals.

Will (Glen Howerton [IMDB]) is one of these people. He likes it. It’s comfortable, he gets out of the house and he gets to spend time with his friends Chad (Steve Little [IMDB]) and Gino (Ben Schwartz [IMDB]). Chad is an unhappy salesman who pretends to be a smoker just for the breaks and Gino is an absolutely terrible cop. He also gets to lust after Becca (Adrianne Palicki [IMDB]), another regular.

When the owner of the chain threatens to turn their fragile little haven into an upscale bistro, the gang goes into action in the most ridiculous ways possible. The whole “caper” aspect of the story is the weakest, overall, but (despite nominally being the main point) is given very little play. Most of the humor is solid, if more of the “chuckle” rather than “roar” variety. It wanders between clever, fast-paced chatter and bombastic political incorrectness without ever committing to either.

That’s the real problem with the movie, overall: a lack of commitment. There are many good ideas and a few great ones. It approaches the edge often, but then retreats to safety before jumping. It’s solid, funny and well done – happily well above average – but it also fails to take risks and suffers for it.