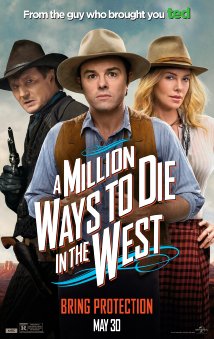 “A Million Ways to Die in the West” on IMDB

Hey Seth MacFarlane [IMDB], whatchoo doin’ make’n a Western, huh? Sure, comedy Westerns are a woefully underrepresented genre, but do you really think this is a niche you should try and fill?

MacFarlane’s work tends to rely on two things. Firstly, throwing everything-and-the-kitchen-sink at the audience. So what if a few jokes miss, there are so many of them that some are bound to hit, right? Secondly, repetition. Something that probably isn’t funny may become funny if you do it a dozen times in a row.

For the most part this is a straight, if goofy, Western. This means that gags are occasional rather than rapid-fire. This also means that when a gag flops, you’ve got a nice long period of not laughing while waiting for the next one. The most effective jokes concerned the occasional bizarre death of some passerby, but these were unfortunately few and far between.

We do get a lot of talking. Talking about things that could have made better visual jokes, but instead get talked about. There are none of his trademarked “long burn” gags here at all as far as I could see. It’s a joke or two, some story, a lot of talking then another joke or two. There is an extended drug trip where things cut loose, but even that is generally dull and uninspired.

The entire thing feels tossed together and ramshackle. In my opinion, the same story with a focus on just the hilarious, unexpected deaths of passerby could have been a real winner. But this story as it is – sparsely littered with odd asides and sight gags, a few monologues and some really humorless running gags – is half-baked and lame.