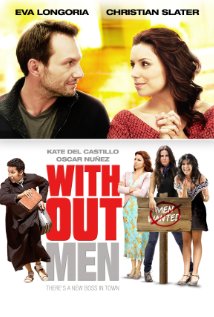 “Without Men” on IMDB

The plot is simple: all of the men in a small Latin village are kidnapped by resistance fighters leaving the women to fend for themselves. We see women confused by “manly” tasks like changing light bulbs, milking cows and taking out garbage. The prostitutes are bored. The priest (the sole remaining male in the village) has stopped giving sermons because, with men, “there is no more sin” in the village (sex, apparently, the only sin).

One woman steps up and proclaims that they can do anything men can do! Then she steps down while some other woman says that. Then she steps sideways because the script clearly has no idea what it wanted her character to be. She assumes the role of mayor and then assists the priest in his attempt to mass impregnate all of the nubile girls so that they can “finally make male babies”.

It sometimes seems like a complete parody of feminism. Mocking the “we are all equal” mentality with jokes and gags based on the worst stereotypes of women. For example, at one point we hear (from the male narrator): “The women decided that war was a manly thing, but isn’t nagging a kind of war?”

At other points it dips into a serious, “women don’t need men” vibe, as well essentially the entire town decides to become lesbian at once. Women, we’re told, share with each other. They don’t solve problems with violence. They work together to better their lives in ways men are incapable of comprehending.

For their part the men are painted with the same brush. Brash, arrogant, cowards who consider women property to be protected rather than partners to be worked with. The government, for example, allows the town to have a female mayor, “just until a man can be sent to do it.” As noted, the priest doesn’t fail to use the situation for his own sexual advantage.

This is one weird-ass movie. The actors, consisting of pretty much every Latino ever seen in a major TV role, do their best but are overshadowed by the lack of focus and confused character development. There are a few laughs, but not enough to overcome the confusion. In short: decent idea, pants-crapping crazy execution.