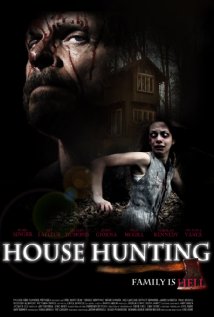 Marc Singer’s [IMDB] looking for a new house along with his bitchy girlfriend and his annoying daughter (who hates his bitchy girlfriend). When approached by a stranger who suggests that he check out a house just left of the ass-end of nowhere, he decides, “why not?” On the way up they meet another family, headed by the versatile Art LaFleur [IMDB], looking for the same house.

They find the house abandoned, but outfitted with a speaker system that tells them all about the property in a chipper voice. Feeling more disturbed than intrigued, they decide to leave. They almost immediately crash their car avoiding a running, exhausted girl who they discover has had her tongue ripped out. Both families pile into the remaining vehicle and head out for the police, the hospital and civilization in general.

But they can’t make it – no matter how far they drive, or in which direction, they always end up back at the house. With no other choice, the families move into the house. Each day the cupboard is filled with seven cans of beef stew, one for each of them. Each morning there’s more wood on the pile to replace what they’ve used and the toothpaste is refilled. Each day blends into the next. Months pass.

Being trapped in an inescapable hell is, apparently, frustrating and it’s not long before frayed nerves turn into paranoia and paranoia turns homicidal. It’s clear the house has its own agenda and as things begin to fall apart some pieces of the truth begin to come out. Perhaps these people, at least some of them, deserve what their getting?

The premise is great, but unfortunately veers in two directions at once. On one hand, the motive is clear: supernatural revenge. This works very well and is even more powerful because many of the victims are truly innocent bystanders. They’re just caught up in the mistakes (or perceived mistakes) of a few.

The problem is the other story that runs parallel and describes a supernatural trap. It’s only needed to explain the unnecessary twist ending and the running mystery. The problem is that a trap doesn’t care who falls into it. Being in the wrong place at the wrong time is all that’s required.

It’s difficult to explain without spoilers, but to be cryptic: if these folks we’ve followed did all that then what did the people before (or after) them do?! The more thought you give it the less sense it makes and the more the two concepts compete with one another.

Despite this unfortunate identity crisis this is still a solid example of smart, psychological horror, and that’s something we don’t see enough of lately. The script wisely creates – and then adheres to – rules. The suspense grows according to these rules, but more importantly is released according to them as well. The movie keeps you interested and off balance, but you never feel confused or betrayed.