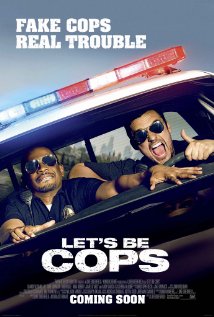 This is a formulaic, by-the-numbers, utterly predictable, totally forgettable buddy-cop comedy. The characters are clichéd. So are their problems and the solutions they pursue. Still, for all that, it’s pretty damn funny.

Much of its likability comes from its stars. Jake Johnson [IMDB] and Damon Wayans Jr [IMDB] have worked together for some time on Fox’s “New Girl” [IMDB] and have a great, easy chemistry. Johnson, for his part, plays pretty much the same lovable loser character in both, so if you like the show you’ll probably like the movie. Wayans plays a timid game designer who can’t figure out how to get the respect he craves from his fickle, vacuous boss.

In a (failed) bid to impress said boss into funding his game about heroic beat cops he creates a presentation complete with realistic police uniforms. In a misguided attempt to cheer him up, his unmotivated roommate (Johnson), convinces him to take the uniforms out for a spin and see what its like to actually be cops. Drunk with power and prodded by Johnson, the two begin a successful, if fictional, career as police neighborhood officers.

Of course, this leads to them pissing off the wrong people, bigger problems than they were expecting and, eventually, a run-in with actual cops. One of those cops is an overly trusting Rob Riggle [IMDB]. Riggle’s performances tend to feel rather cookie-cutter to me, but he’s wonderful here. It may simply be that this role reflects the kind of man he seems to actually be and so he’s more comfortable. Whatever the reason, he nails it.

As you’ll expect, the more the two try to pull themselves away, the further they get pulled in. Eventually they find themselves working to take down a notoriously dangerous drug dealer and expose deeply entrenched corruption. Minor spoiler for the stupid: despite having committed literally hundreds of counts of fraud, impersonation and misuse of public resources, they both end up fine having learned valuable lessons about themselves. Isn’t that nice?

The comedy is simple – maybe even stupid – but warm and joyous. There’s no malice in this movie. These guys are committing serious felonies, but the vibe is always that of kids playing cops and robbers. They’re not bad guys, they’re well-meaning doofuses and who can stay really mad at well-meaning doofuses for long? The immature humor reinforces the overall attitude of the movie well.

So, yes, the movie plays out exactly as anybody that has seen two movies would predict. At the same time, there’s a genuine respect and exultation of the police (at least the good police). While not blindly idealistic, this elevates the movie much higher than any straight out farce could have. It’s silly, but it has a heart and that makes all the difference.