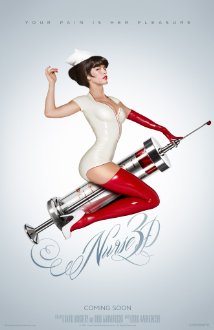 This movie was clearly aiming for some kind of artistic statement on the juxtaposition of sensuality and violence. The excellent posters, in the design of classic pin-up fantasy girls, probably got more attention than movie itself, which turned out to be much more a mixed bag.

As a grindhouse-type film the story only needs to get us from point “A” to point “A” being shoved forcibly into somebody’s eye-socket. In this case we have a sensuous nurse, played by Paz de la Huerta [IMDB], who spends her evenings hunting and killing cheating husbands. Or, really, anybody that annoys her. When the object of her affection and protegé, Katrina Bowden [IMDB], begins to suspect her, a dangerous game of “she-said, she-said” begins.

There’s no question that both women can carry the “sensual” part of the movie’s equation, but there is an odd balance at play. Bowden continues her trend to flirt with, but never commit to nudity. I’m not faulting her for that choice, but de la Huerta is seemingly never clothed. She inhabits the movie in various states of undress that cast a weird contrast to Bowden’s modesty.

More importantly, neither are very good actresses. De la Huerta’s throaty, pouty delivery has always felt like a put-on to me – either that or she’s completely stoned 24/7. For lack of a better word, she just always strikes me as weird. Coupled with her penchant for nudity there’s an odd sense that you’re somehow taking advantage of the mentality disabled. It’s unsettling in a way I’m sure the movie doesn’t intend.

Bowden is more impressive, but has yet to distinguish herself despite being attached to some amazing properties (“Tucker and Dale vs Evil” [my review] being one of my favorite movies of all time). She may be perfectly content as a modern day scream queen, but it would be nice to see her challenge herself.

The movie handles the “violence” side of things much better. Our nurse is ruthless and bloody in her pursuits. The effects walk close to, but don’t cross “too much” and are nicely varied. There are several “clearly for 3D” moments that, as usual, stand out like a sore thumb. That had to be expected, and forgiven, I suppose.

Forgive the minor spoiler, but much of the last act is a psychotic rampage through a hospital that should easily please even discerning horror fans. It may not be worth the price of admission on its own, but it comes close. While de la Huerta may have a lackluster screen presence generally, she does do pants-crapping crazy very well.

All told, I’m going to recommend this one. Its flaws are forgivable and, hell, maybe de la Huerta’s natural creepiness does help it more than hurt. At the very least you’ll have to admit this was the role she was born to play.