“The Maze Runner” on IMDB 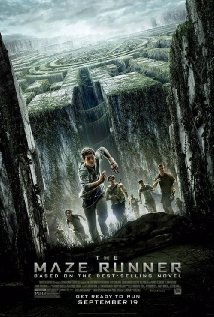 Hey teenage girls, we turned one of those young-adult fiction books you seem to like so much into a movie! We crammed in a whole variety pack of 20-something heart-throbs you can pretend are in their teens! We’ll have posters for sale and everything!

Don’t worry, it’s only mostly a sausage fest. We made sure to include one vaguely strong, but mostly vacant, female character that you can imprint yourselves on easily. She has almost no personality at all; in fact, when we meet her she has total amnesia! See how spunky she is? Isn’t that just like you?!

Of course, everybody has amnesia in this movie. They’re all dumped in the middle of a giant maze with no memories. There are monsters in the maze, but they still wander around it for some reason. That is until Thomas shows up. He’s a smarty-pants that figures out in a few days what everybody else couldn’t in a few years. He’s still blank tho’, so sure: he could totally be your boyfriend!

But so could any of these guys! There’s the mature guy. He won’t forget your anniversary! There’s the smart guy – you know he is because he has an English accent – that will totally get your poetry. There’s the fiery passionate guy, the athletic guy, some tall guys, some short guys and, of course, the fat kid. You really have your pick!

The middle of the movie is the best part, if we do say so ourselves. The mystery is pretty mysterious and at least sorta interesting. The monsters are pretty monstrous and at least sorta scary. The action may not be particularly smart, but it moves well and just look at those maze runners run that maze! The characters are cardboard, but there’s enough of them to create the illusion of depth, if nothing else.

We do have to admit, however: the end blows. We really don’t know what the hell we were thinking. We changed just enough of the book to make everything else make no sense. We also took some really stupid things in the book and fixed them so that they were even stupider. So when the explanation finally comes along, you’re probably going to think that you missed something. You didn’t. It was just terrible. That’s our bad. That’s on us.

You still want those posters though, right? Sure you do.