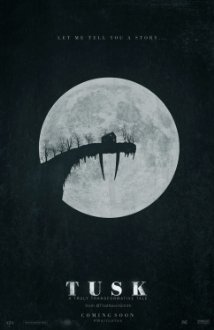 Apparently the idea for this movie was the result of an extended discussion on writer/director Kevin Smith’s [IMDB] podcast. How about a guy, the joke went, that captures people and tries to turn them into walruses? The gag picked up steam, Smith got excited and made a movie.

Surprisingly, not a terrible movie at that. Lord knows that it’s not a good movie – it’s still a movie about a serial killer that turns his victims into walruses – but it has an undeniable… something. I continue to be lukewarm on Justin Long [IMDB], but at least Smith dragged him away from the naive, doe-eyed doofuses that define his catalog. A lot has been said about Johnny Depp’s [IMDB] uncredited role. I found it workable, but uneven. Casting Michael Parks, however, [IMDB] was pure genius.

His ability to completely sell whatever character he’s given is essential to whatever success the movie enjoys. The premise is silly – everybody involved agrees on this – so you can really only succeed via one of two paths. The first is mocking the idea as a farce. This is easier, but almost never successful. After all, if you don’t respect the idea enough to treat it seriously, how could it be any good?

The other is, obviously, to treat it absolutely seriously. Grab it tight, run and don’t look back. The problem here is that you have to commit, in every detail, to pull it off. You have to ignore the voice in the back of your head that demands that you temper the attempt; that you leave something that tells the audience that you don’t really take it that seriously.

Unfortunately, Smith listened to that voice and sabotaged the movie. Mostly via Depp’s overly cartoonish character, but most substantially via a ridiculous, tacked-on ending. The last few minutes of the movie is the cinematic equivalent of pretending to pull a hamstring. It’s Smith winking and telling us, “yes, I knew it was crap” when he should have stayed the course and taken the risk.

It’s almost shocking how the silliness of those last few minutes alter the entire experience. Absolutely watch this, but, as an experiment, just turn it off when you see “One Year Later”. Consider it for a while and decide how you feel. Then watch the last few minutes and see if your opinion changes.

For me, at least, the ending tainted everything. That’s a shame. Without it, the movie is a quirky, mostly successful experiment in injecting gravitas into something patently silly. With it, the movie ends by telling you that it’s not worth paying attention to.