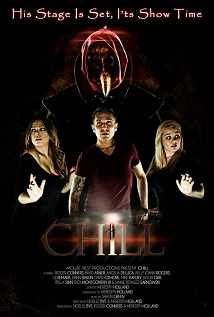 [Disclosure: I previewed an online, pre-release screener of this at the request of the filmmakers. The film was recently picked up for distribution, something you can read more about on their Facebook page. The version reviewed may be different slightly from the release.]

Before we begin, some standard disclaimers. This is an indie movie with a capital “I”. Everything about it is defined and bound by the budget, or more specifically, the alarming lack of one. Yes, miracles have happened. Movies with no budgets have rivaled Hollywood’s best, but if you judge everything by miracle standards, you’re going to be disappointed.

The story is familiar: college students lock themselves in an old building overnight  to play a game, now banned, that resulted in mass murder years before. The whole thing will be streamed live on the internet in an attempt to cash in on the tragedy. Somebody doesn’t like this idea; somebody with a sword.

The reenactment of a storied tragedy, people locked in an old building overnight, reality TV, the masked killer; these are well-trod themes. Of course, they’re common because they tend to work. Successful people know their limitations and how far they can be pushed. When you’re facing nearly overwhelming limitations, it’s often best to play things safe. Novelty is important, but not worth sabotaging the entire effort.

Drive is much more important and there’s plenty of it on display. Most no-budget movies reduce their scope drastically. One or two locations, just a few roles, limited scene changes, mostly easy, medium shots, etc. Reducing the work reduces the opportunities for failure. Here there’s a huge cast, multiple locations and many scene changes.

The staging and editing are bold. They’re also not always successful. Much of this is clearly due to the budget and the need to use locations “as is” and “when you can” rather than “when the light and mood are right”. Still, there’s a clear desire here to not simply take the easy options.

Even in the worst moments, it’s always clear what the goal of the shot or scene is. That’s in contrast to the “throw it against the wall and see what sticks” randomness you often see. In some cases this tenacity actually hurts: in working so hard not to use lazy medium shots, for example, there are missed opportunities where a medium shot would have worked pretty damn well.

The cast is green – very green – but it’s also large and varied. While there isn’t a true standout, neither is anybody a complete disaster. Admittedly, a couple come close, but they’re smartly relegated to small (and often dead) roles. The script isn’t particularly deep but the dialog rang true and that’s more difficult to pull off. It also doesn’t fall into the trap of ridiculously verbose exposition.

That said, there are some aspects of the story that could have used a little more explanation. The core thread was clear, but some of the secondary character relationships and transitions are overly complex. One or two are downright confusing. The ending is weak. Not disastrously so, but my rule of thumb is always: the less twist, the better.

The special effects are slasher-standard, but well implemented and, thankfully, all practical. There’s no attempts to “enhance” proceedings with ridiculous, grade-Z CGI. The design of the killer is a high-point. The traditional, and intensely creepy, plague doctor mask is so completely effective that I immediately wondered why I hadn’t seen it used in other films.

This team is raw and inexperienced, but there’s clearly potential there. The movie is rough, but any genre fan has seen far worse made by people that cared far less. “Chill” isn’t that one-in-a-million miracle indie film that shames Hollywood, but it is a solid stepping stone that should easily please fans of the genre.