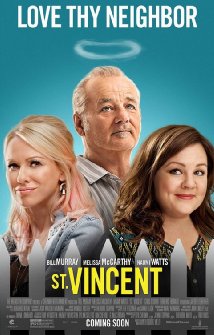 This is a good, if utterly formulaic, feel-good movie. Bill Murray [IMDB] plays Vincent, a classic Hollywood curmudgeon. He’s a gambler, thief and racist. Seemingly an altogether horrible human being. Jaeden Lieberher [IMDB] is Oliver, a lonely kid with an overworked mom, Maggie (Melissa McCarthy [IMDB]), who just moved in next door. Struggling to pay for his enfeebled wife’s nursing home, medical care for the prostitute, Daka (Naomi Watts [IMDB]), that he’s knocked up and, of course, gambling debts, Vincent agrees to watch Oliver.

So, we have a seemingly terrible old man and a precocious, misunderstood kid thrown together. What could possibly happen?!

As you probably expect, Vincent is soon exposed to be an alien emissary sent to collect the pineal excretions of Earth’s children. A zombified Oliver infects the children of his new school, turning them into rampaging killing machines. Maggie and Daka find new love in each other’s arms and vow to destroy the monster they knew as Vincent. The last act is an epic hoverboard battle across the towers of the Brooklyn Bridge where Vincent is finally defeated. The sequel tease, of course, is that the monster may live again through Daka’s unborn child.

No, Vincent and Oliver eventually come to respect and love one another making each other better people in the process. Vincent does some terrible things that never get mentioned again (presumably he was forgiven) and Oliver does some sweet kid stuff that makes everybody weepy eyed. We finally learn that Vincent does, indeed, have a heart of gold and Oliver is stronger than anyone expected.

It’s a feel-good movie. A paint-by-numbers feel-good movie, to be sure, but a sincere, well-done one. Murray is rarely a bad bet. It also has Chris O’Dowd [IMDB] (in a small role) and he makes everything better just by showing up. Still – be honest – that alien shit would have been pretty damn cool, right?