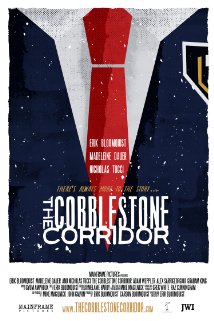 “The Cobblestone Corridor” on IMDB

[This review was completed at the request of the filmmaker. No other consideration was given.]

Written, Directed, Produced, Edited and Starring Erik C. Bloomquist [IMDB], this is an enjoyable experiment in genre storytelling. Set in a posh New England prep school (thus the “cobblestones”) it follows Archer, the hard-boiled, no-nonsense editor of the school newspaper in his single-minded pursuit of the truth.

The story at hand is the suspicious termination of one of the more accomplished professors at the school. Archer initially needs some convincing to take on the story; convincing of the beautiful, long-legged variety. Once on the case he and his unwanted, but persistent, protegé work it like a dog with a bone.

The script and the characters are drawn in a classic 1940’s film noir style that juxtaposes well with the bright, clean visual presentation. 80-year old slang coming from modern teenage reporters gives the production an odd, but not displeasing, tone of near-parody. Playing it absolutely straight – the only way to play it in my opinion – the filmmakers bring the audience into a private joke; one that they can both share a wink and smile over.

This is a nearly-no-budget production so expectations must be set accordingly but, surprisingly, few excuses need to be made. The story is tight and keeps focus well. The acting seems a bit wooden, but that may indeed be purposeful considering the vintage dialog. The technical aspects of the production – staging, lighting, camera work, etc. – are straightforward, competent and effective.

You can see the film now on either Vimeo.com or Indieflix.com, and I highly recommend that you do. You can also keep up with developments on the project’s FaceBook page. I fully expect that we’ll be seeing more from this talented group in the future.