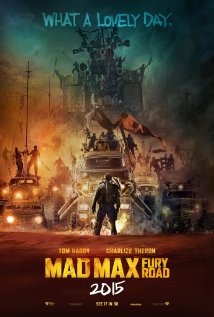 George Miller’s [IMDB] original Mad Max trilogy is an enigmatic classic. 1979’s “Mad Max” [IMDB] told the story of a vengeful cop losing his humanity against the backdrop of civilization on the brink of collapse. It was the only offering not set in a desert wasteland and, more importantly, the only story about Max, himself.

The second film, 1981’s “Mad Max 2: The Road Warrior” [IMDB], is presumably set after a world-wide nuclear war has erased civilization. It tells the story of a peaceful group of survivors under attack, by a brutal horde, for the gasoline they’re able to refine. 1985 saw the final film, “Mad Max Beyond Thunderdome” [IMDB] and the rise of a new civilization, of sorts, in the mercilessly controlled Bartertown. Max helps a group of children left orphaned and forced to create their own society on the outskirts.

Neither of these films are about Max. In both, he plays a pivotal, but temporary, role in another story. He’s an anti-hero by habit and a hero when absolutely necessary, but always stands apart. Each film ends with Max alone and an epilogue from another character.

These themes are omnipresent in the current film. Max (played by Tom Hardy [IMDB], but perhaps not the same Max as Mel Gibson’s [IMDB] original, see sidebar) is captured by the War Boys, the cult army of Immortan Joe, a ruthless, deformed warlord who controls the only source of available clean water. His community is the apex of a trade triangle with the aptly named Gas Town and Bullet Farm (guess what they produce). Max, being a universal donor, is chained and muzzled as a “blood bag” for the War Boys, many of whom are suffering from advanced radiation sickness.

Although George Miller has stated that Hardy does, indeed, play the same Max as in the previous films, many aspects of the character and the world seem out of place. A more intriguing theory, raised by some fans, is that this Max is actually the grown “Feral Kid” from the second film emulating his hero. There’s some compelling evidence for this (minor spoilers follow):

Even if Miller has put a kibosh on the concept, the evidence is still compelling. In any case it’s interesting to consider “Max” as an archetypical amalgam of multiple tortured souls, across multiple generations.

Miller explains that each story can be considered a stand-alone entry exploring similar themes in the manner of classic Westerns. This does make sense. Each of Max’s stories (with the noted exception of the first) can easily be considered somebody else’s story about Max. It’s hard to argue with the man himself, but it’s also hard to deny that the Feral Kid theory is much more fun.

Joe’s most trusted Imperator, Furiosa (Charlize Theron [IMDB]), steals Joe’s harem of wives and his most powerful War Rig, then flees toward her former homeland. He collects his allies in a massive war party to hunt her down. Max is dragged along by the war party; he is, after all, just a first aid kit with a head at this point. Circumstances eventually break, momentarily, in his favor and he ends up in an alliance with Furiosa.

Aside from a (in my opinion, needless) narrative prologue Max has actually said almost nothing to this point. A few grunted words and a lot of growling glares has been the sum total of his interaction. He’s been trussed up, muzzled, immobilized and carted around; basically spending the entire first quarter of the movie as a glowering prop.

There are few scenes from Max’s point of view. Seemingly only when lacking any other option does the audience follow Max himself. In one scene, for example, Max heads off to ambush a pursuer in what promises to be an explosive action sequence. Yet the audience stays with Furiosa to witness it from afar. This works to both further isolate Max and reinforce the other character’s need for community.

This need is expressed further in Furiosa’s desire to protect the wives and return to her people and in the War Boy’s devotion to their leader and his spiritual promises of a glorious afterlife. It can even be seen in Joe’s twisted devotion to his slave brides and the healthy children he hopes to have with them. Max’s life is about simple survival, but for the others it’s about a better survival.

The story is told with a restrained sparseness unusual for modern action film; most of which pound even the simplest concepts into the collective head of the audience. Important concepts are covered, once, and assumed to be understood. There is never a conversation about whether Furiosa and Max should trust one another; they simply do when it’s clear they must.

Furiosa is the star of the movie. Theron’s performance isn’t as primal as Hardy’s but it retains much of the same restrain and subtlety while also allowing her a much greater emotional range. She’s a woman, yet gender politics never apply to her, despite them being a major theme between Joe and his unwilling wives. Max, without comment or ego, simply accepts when her skills are greater than his own.

The nuance of the relationships and character development is held in stark contrast to the bombastic industrial design of the action sequences. As in earlier installments, the remnants of humanity worship gasoline and vehicles. The wild designs (including the “Doof Wagon”, a traveling loudspeaker deck with drums, horns and a flame-belching guitar player strung up like a demonic marionette) are wonderfully over-the-top and visually stunning.

The battle sequences feature dozens of multi-level vehicles, explosions and a wild sense of speed. They’re easily enough to please any action movie junkie. They’re also smart. Each faction has a distinct style to their rides and tactics and that remains consistent throughout. Scenes are shot with an eye to what looks good, not to what best spoon feeds the audience.

Nearly all the effects are gloriously practical. The few digital effects are used for either absolutely practical reasons, Charlize Theron being unwilling to let the director actually amputate her arm, or completely ridiculously, as when explosions are sent directly into the faces of the audience.

In case it’s not clear: I loved this movie. It stripped away all of the painful tropes and cliches that the original trilogy was at least partially responsible for creating. It boiled down the ideas and themes of the title character into its purest form and injected it straight in our veins with gleeful abandon. It’s a wildly successful experiment in extremes and not to be missed.