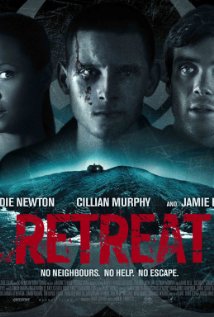 This one screams “INDIE!” louder than Marion Ravenwood in a basket. It’s a very small, tight cast: only five people total, two of which you barely see. It’s shot in, essentially, a single location: a lonely house on a deserted island. It has a good, but not quite “A” list, cast that probably brings more effort to the material than it really deserves. It also, by law, has a healthy collection of twist endings.

None of that means the movie is particularly bad, of course.

Martin and Kate (Cillian Murphy [IMDB] and Thandie Newton [IMDB], both able to use their own accents for a change) are a couple in crisis. They’ve returned to the isolated island vacation home where they honeymooned in a last ditch effort to save their marriage. The core of the couple’s problems are predictable, but good performances make them matter.

Beyond sketchy wireless communication with the elderly caretaker on the mainland, they’re completely isolated. No phones, no television and no radio. When a soldier, Jack (Jamie Bell [IMDB]), washes ashore, wounded and raving about an epidemic illness sweeping europe, they’re justifiably skeptical. Jack doesn’t broach argument and, for their own protection, enlists the couple to barricade the house to keep them safe from the infection.

This is the core question of the movie for Martin and Kate (and for the audience as well): do we believe Jack? Martin and Kate work through the arguments for us. They tease information from Jack while desperately trying to retain what little control they have over the situation.

The goal of a movie like this is to get the audience thinking about how they’d handle the situation. On that score, it succeeds admirably. You won’t always agree with the couple’s decisions, but thankfully you’ll rarely consider them completely inane.

Meaningful performances and well-realized characters smooth over periodic rough areas in the script. They also keep the audience interested and sympathetic. The movie takes some time to ramp up, but minor pacing issues aside, this is an engaging and interesting thriller well worth tracking down.