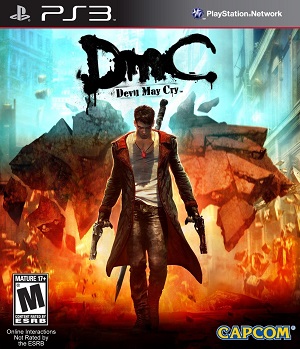 My financially necessary “I can’t pay full price for games” rule often means that I let amazing experiences pass me by. If I’m lucky, I find them later – much later than everybody else – in the bargain bins. I then wander around desperate to find people to boisterously discuss something that, for them, has already become quietly nostalgic.

So, with that firmly in mind, let me tell you why you just have to play this utterly amazing two year-old game! Even when, you know, you probably already have.

“DMC” is, of course, a reboot of Capcom’s immensely popular demonic beat-’em-up from the PlayStation 2 era, “Devil May Cry”. The company wisely farmed out the new game to the amazing team at Ninja Theory, developer’s of the often-underappreciated classics “Heavenly Sword” and “Enslaved: Odyssey to the West”.

The story is similar to the original games. You play Dante, a Nephilim (demon-angel hybrid) who would rather just be left alone, but is being endlessly hunted by the demons that secretly control our society. They attack by pulling Dante into their world, Limbo, which closely aligns with our own. When approached by a rebel group that promises both revenge and information about his past, he signs on.

Ninja Theory has always demonstrated a remarkable skill for action cinematics and rich character interaction. More practically and subtly they also have a gift for in-game camera management. These skills make them perfectly suited for the style-over-substance mentality that dominates the series.

The game oozes attitude in a way few ever have. There is a razor-thin line between incredibly cool and incredibly stupid; between utterly stylish and utterly ridiculous; between amazingly badass and amazingly childish. This game owns that line from the moment the over-the-top, tongue-in-cheek, titillation of the opening sequence begins.

This balance is pushed everywhere. Your matching pistols are “Ebony and Ivory” and your sword is “Rebellion”. Other weapons are “Arbiter” and “Revenant”, but you also eventually gain access to “Kablooey” a blunderbuss with explosive darts. A difficult battle might begin with demonic voice saying “Kill him!” while the same words fly stylishly across a wall of the arena. When the last enemy is finally put down, “Fuck You, Dante!” rolls across in the same fashion.

Silliness exists, but is so well tuned with the emotional beats of the game that it never seems silly. Serious moments are also common and are used primarily to bolster emotional attachments. They are never allowed to break momentum. The game shares the same basic tempo with others in the genre. Distinct “battle”, “explore”, “puzzle” and “story” segments exist, yet remain masterfully paced.

Reboots often fail to capture whatever magic made the originals worth rebooting. They shoehorn in discordant play-styles to pander to “modern” audiences and alter tone wildly in mistaken efforts to seem more “mature” or “evolved”. Ninja Theory has succeeded where so many have failed: they’ve take a beloved classic and lovingly magnified, polished and perfected everything that made it great.