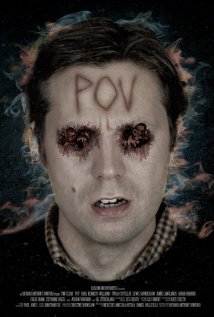 [This review was completed at the request of the filmmaker. No other consideration was given.]

This is a no-budget experimental horror film from writer/director Richard Anthony Dunford [IMDB]. The story is told in real-time and wholly from the visual point of view of the main character.

Firstly, it must be acknowledged that the lack of budget, as you’d expect, affects every aspect of the production. Staging, acting, effects – everything – is just as good as you’d expect “free” to be. Either you’re able to accept this and move on, or not.

The story is familiar. After a bad break up, a man’s friends drag him to a house party being held in a derelict nursing home. The property is rumored to be cursed; the former owner driven insane by demons. Demons do, indeed, show up and things play out as you expect them too. The ending goes down something of a rabbit hole, but corrects itself eventually.

The titular conceit of the movie, the first-person point of view, dominates the experience. In this regard a simplistic story is a benefit, as your attention can be better spent processing the unusual perspective. For the greater part the idea works, although it’s not without rough edges.

Shooting was clearly done from a head-mounted camera, which makes the main character seem significantly taller than those around him. The rest of the cast does an excellent job of maintaining “eye” contact, but we spend most of the time looking slightly down on them all. I screened the movie with several others and, happily, nobody in the group experienced any sort of motion sickness, despite expectations to the contrary.

There are some odd moments, but ultimately the experiment was a success. It’s not something that I think will become popular, but worked far better than I expected it would. The only real issues arose during a brief, but important, fight scene where the camera movement became more confusing than insightful.

That said, I’m not certain the gimmick truly added anything, either. If anything, the movie’s other conceit, being set in real time, caused more problems. Many of the early scenes felt overly padded. Events which would have made sense over the course of an entire evening were smooshed together with little cool-down or build-up.

Technically there’s little to complain about (again, remembering the budget). A fixed camera limits your editing options considerably, but the little that could be done was done very well. There are a few sound issues, especially outside. Likely due to the equipment used, scenes are more well-lit than you might expect in a horror movie. The few effects used are cheap, but work. The “missing eyes” gag is particularly effective.

I must admit to going into this viewing with low expectations. The genre is glutted with bland, creatively bankrupt, cookie-cutter money grabs. The first-person perspective, I assumed, would be a meaningless, ultimately unwatchable gimmick.

I was wrong and happy to be so. There’s a solid, interesting movie here. It’s available on demand in the U.K. from TheHorrorShow.tv and in the U.S. from ContinuumMotionPictures.com. If you have any interest in avant-garde horror, or are just curious to see what can be done with no money and some gumption, it’s definitely worth the time.