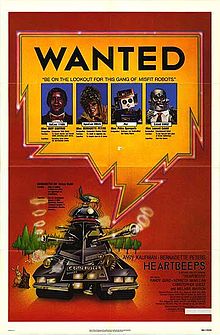 I continue my month of A.I. with one of the absolute strangest movies in the genre. This movie is bizarre on a multiplicity of levels. It was Audy Kaufman’s [IMDB] first (and only) leading role in a film. Its budget was nearly double that of its contemporary, Escape From New York [IMDB]. Stan Winston [IMDB] did the effects! John Williams [IMDB] did the score! This was going to be a huge film!

The story followed Val (Kaufman) and Aqua (Bernadette Peters [IMDB]), two robots stored on a shelf together awaiting repairs. Val is a valet and Aqua is a hostess designed primarily to offer small talk at parties. They speak in a forced cloud of metaphorical mechanical references. We overhear the technicians talking about how these new models have “untapped capacity” and that “we’re not even sure how much they can do”.

In perhaps the most ridiculous motivator ever set to film, Val impulsively decides to leave the factory to “gain data about trees” because he has a “specialization in lumber commodities” (as, clearly, would be needed for an automated valet). He asks Aqua to accompany him and a third bot, Catskil, a comedian unit capable of speaking only in tired one-liners, joins them.

It boggles the mind when you consider just how many alternate explanations could have been found to set the robots off on their own. They might have dropped from the back of a truck. They could have run from the threat of reprogramming or been afflicted with a programming flaw. They might have followed a pretty butterfly. Literally anything would have been better than a “specialization in lumber commodities”.

Regardless, the three set out in a stolen van, which they crash. From spare parts in the back they build a small new robot, “Phil” (who’s wordless blips and bloops are, I shit you not, performed by Jerry Garcia [IMDB]). Due to another ridiculous circumstance, the group is soon under pursuit by a glitchy police robot, The Crimebuster, with an itchy trigger finger, as well as the factory workers who lost them.

Most of the story focuses on Val and Aqua’s growing concern, and eventual sacrifice, for their progeny, Phil, as they also come to terms with their illogical dependence upon one another. Ignoring the ham-fisted characterizations, this aspect is actually quite sweet. It completely lacks subtlety, style or grace, but still, it’s sweet.

Although a select few do land, most of the gags are terrible. Most rely on tired, simplistic mechanical puns. Val exclaims, for example, “You took the words right out of my speaker!” The rest is lackluster slapstick as when Val attempts to evict a grizzly bear from its den to gain shelter for his companions. The Crimebuster is played, exclusively and unsuccessfully, for laughs and despite it being utterly superfluous to the story is given huge swaths of screen time.

Visually there are surprisingly no complaints. The effects are dated, but for the time, impressive. In fact, Stan Winston was nominated for the inaugural “Best Makeup” Oscar for his work here. He rightfully lost to Rick Baker [IMDB] for An American Werewolf in London [IMDB], but it does make this and Oscar nominated movie.

As you might have guessed by now, this wasn’t a huge film. The cut originally delivered by Director Allan Arkush [IMDB] so disappointed executives that it was ultimately whittled down to 78 minutes (with credits) before release. In the end, it grossed less than a fifth of its budget and prompted Andy Kaufman to apologize for it publically during Late Night with David Letterman.

For my part, I remember seeing this when it was released (well, shortly after, as it needed to filter down to the local dollar theater, which didn’t take long in this case). I was 10 years old. I remember being confused by much of it, but oddly I also remember being legitimately moved. For some reason various scenes and lines from the movie have stuck with me over the years.

Rewatching it for the first time in 30 years I have to admit: I didn’t hate it. Dammit, if I must be truthful, I think I actually enjoyed it. It wears its flaws on its sleeve, it looks and plays more like a bad TV show than a big-budget movie. It’s objectively terrible in ways that do not breach argument, yet, dog help me, I think I might actually like Heartbeeps!