The 80’s was a great time for A.I. in film. We had reached a point, technologically, where the idea of smart machines seemed more inevitable than fantastical. Crucially, filmmakers could also assume their audiences were computer literate enough to understand more advanced concepts. Just as importantly, they knew that the audience wasn’t too savvy. A flurry of technobabble could make ridiculous claims sound reasonable and in the 80’s we got a lot of technobabble. 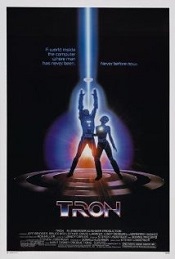 Greetings programs! I was 11 years old when Tron was released and I devoured every corny, ham-fisted second of it. Remember Bit? That cute little flying puppy thing that chanted “yes yes yes” or “no no no”? Wasn’t he great?! The lightcycles?! The recognizers?!

Of course, the A.I. here was the tyrannical Master Control Program. He used his power to force every other program in the system to – evil laugh! – play games! Yeah, that really was the plot: the bad guy forced everybody to play games. Granted, they were games to the death, or – sorry – “derezzing”, so I guess “evil” does apply.

Tron is, with a minor lift from nostalgia goggles, still just as impressive as it was when I was 11. The effects are still nice and the lingo worth a giggle, but the movie remains a classic simply because it was so damn much fun. 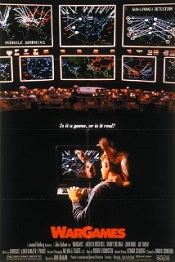 Where Tron was a fun romp through a computer candy land, this taught the now 12 year-old me that Armageddon was, like, right-the-hell-here! Even as a dumbass tween I always had a suspicion that Matthew Broderick [IMDB] would destroy the planet someday.

This was the most realistic A.I. movie of the time, and in many ways could still take the title today. The A.I. was a military computer designed to manage our missile systems, the WOPR. It didn’t require magical advancements in physics, robotics, or battery technology. It was exactly what an A.I. would be: a giant box with a lot of lights on it.

The interactions between the humans and the A.I. were simplistic, as were the lessons that it needed to learn. It didn’t, as is so often the case in these movies, surpass humanity in every way. It remained, effectively, a child throughout making its ultimate realization of the futility of war all the more powerful. 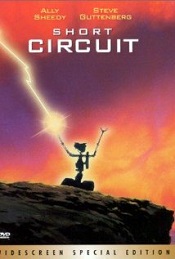 In the same vein as Wargames, but with more, 100% more, Steve Guttenburg [IMDB] and, via poor Fisher Stevens [IMDB] (a caucasian playing a ridiculously stereotypical Indian) 100% more racism as well, this revolved around dangerous military hardware come to life. Here we have the more photogenic robot, Johnny 5, who is struck by lightning and gains self-awareness.

He escapes to enjoy life, make friends and enjoy madcap hijinks. He’s hunted down, ineffectually, by bad guys while trying to convince his brilliant, but naive, creator that he is truly self-aware. Later, the always adorable Ally Sheedy [IMDB] is forced to kiss Steve Guttenburg, but in the 80’s that didn’t seem quite so creepy.

Despite being completely unrealistic as a vessel for machine intelligence, Johnny 5 was lovable as hell. More importantly for the future of robot movies, he was also incredibly and purposefully expressive. Large, mobile eyes and wildly mobile lids allowed the character to emote like few robots before or since. It was so successful, in fact, that a sequel [IMDB] was made. As Fisher Stevens was the sole returning cast member it was, amazingly, even more racist than the original.