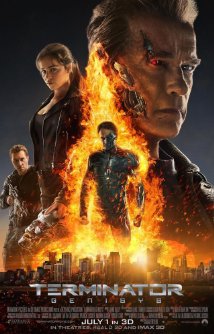 Getting 1984’s The Terminator [IMDB] made was a struggle for sophomore writer/director James Cameron [IMDB]. It was finally completed on a modest budget after collecting a small herd of backers. It was a massively unexpected success. Cameron followed it in 1991 with Terminator 2: Judgement Day [IMDB]. Enjoying a budget over 15 times higher than its predecessor this was a lavish, complex production that pushed the limits of filmmaking.

These were followed by the merely average Terminator 3: Rise of the Machines [IMDB] in 2003 and Terminator: Salvation [IMDB] in 2009. The surprisingly good, but short lived, Terminator: The Sarah Connor Chronicles [IMDB] television series ran from 2008-2009. Together they extended, but also confused, the already complex time travel narrative. It was time to get things under control.

Similar to 2009’s Star Trek [IMDB], this is designed to honor what came before while resetting the narrative for new audiences. In both, time travel is used to simplify and ultimately erase the established timelines while maintaining the characterizations, spirit and excitement of the original movies. The question, of course, is: did it succeed?

Surprisingly, yes; for the greater part, at least. The movie begins by recounting events described, but never shown, in the first film. After the horrors of Judgement Day, when the SkyNet computer network achieved sentience and began to systematically exterminate mankind, the young Kyle Reese (Jai Courtney [IMDB]) is rescued by John Connor (Jason Clarke [IMDB]).

Under John’s tutelage Kyle grows into a soldier for the resistance. Under his leadership they fight, and ultimately defeat, SkyNet. In a desperate ploy, SkyNet sends a terminator back in time to kill John’s mother, Sarah (Emilia Clark [IMDB]). Kyle is sent back to protect her and as he begins to dematerialize, sees John attacked by a cybernetic assassin. He experiences an influx of memories that contradict his own, then lands, as planned, in 1984.

This where things really start to go pear-shaped.

Describing the rest of the movie in any detail without spoilers is impossible. Suffice to say, the timeline Kyle finds himself is not the same one that we experienced in the original film. We’re told, it’s been fractured and changed radically. The mission still exists, but the parameters are all new.

The story merges many aspects of the first two films with new material to create something familiar to long-time fans without alienating new ones. The many callbacks to the earlier films range from corny to inspired, but they’re not relied on to move the story forward. The movie also earns massive geek cred for an inspired cameo by the 11th Doctor himself, Matt Smith [IMDB].

Arnold Schwarzenegger [IMDB] is back to top form reprising his iconic role as the T-800 model terminator. Having already played three variations of the character you might assume there’s little worth revisiting, yet Schwarzenegger manages to bring new life and a fresh perspective to the role.

The repeated explanations defending the time-bending machinations or mechanical voodoo can drag at the momentum. Often, this boils down to “here’s some mumbo jumbo that says we can do this super-cool thing!” These interludes tend to be brief and are thankfully interspersed with liberal action.

That action is just as bombastic and over-the-top as anybody could hope for, even if it’s not the most original. The effects are what you’d expect for 150 million, but again, nothing that you’ve not seen before. Still, classics are classics for a reason and sometimes originality isn’t all its cracked up to be. Sometimes you just want to see a bus flying through the air.

And sometimes you just want to spend time with an old, metal friend who’s really good at killing people. This isn’t a perfect movie. It won’t please those demanding the same innovation and originality as the original film. It will please those with a soft-spot for the originals and an appreciation for what’s come before.