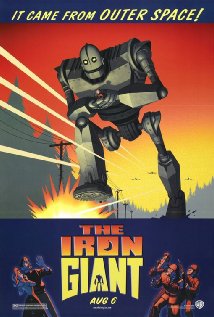 In 1999, untried director Brad Bird [IMDB] convinced Warner Bros. to give him $70 million to create a period sci-fi animated feature based on Ted Hughes 1968 novel The Iron Man. Due to some bizarre circumstances he was given significant control over the production and was able to follow his vision. He made the movie that he wanted to make. It was amazing.

It flopped. It flopped bad. Due primarily to a horribly mismanaged release and marketing campaign, the film made less than $32 million worldwide theatrically; not even half its budget. At the same time nobody didn’t like this movie. Critics and audiences adored it. It currently sits with an impressive 96% Fresh at RottenTomatoes.com; placing it firmly in the top 25 animated films of all time.

In July 2015, Brad Bird announced that a remastered and extended “Signature Edition” of the film would be released on Blu-Ray and in an extremely limited theatrical run by Fathom Events. I missed the movie in the theater the first time. My 10 month-old son was keeping everybody out of theaters at the time. I jumped at the chance to see it on the big screen and dragged my now 17 year-old son, his younger sister and their still smoking-hot mom to see it with me.

[There will be spoilers ahead. If that matters at all, you need to see this movie.]

The presentation began with a heartfelt introduction by Brad Bird standing in front of an eight-foot tall Iron Giant figure that I would gladly sell either or both of my children to obtain. That transitioned into the custom, 50’s style, Warner Bros. logo that Bird fought to use rather than the annoying “Bugs Bunny in a Tuxedo” one that was in use at the time. Then the movie started.

The story, of course, is set in the fall of 1957, shortly after the launch of Sputnik. The United States was at the height of cold war paranoia. “Under God” was added to the Pledge of Allegiance and “In God we Trust” to the money, black-listing was rampant and the ghost of Joe McCarthy was haunting the country. Fear of nuclear annihilation permeated our society.

Although the movie unwaveringly tackles important themes, its most powerful message is that of self-determination. Hogarth tells the Giant: “You are who you choose to be”, hoping that his emotion will overcome his programming. While the Giant’s struggle to overcome his aggressive origins is the most obvious example, several of the characters are provided with opportunities to choose between right and wrong, apathy or compassion and each lives with the consequences of those decisions.

The new scenes, as you might expect, don’t dramatically change the story, but they are welcome. They provide additional depth to the already strong narrative. The first is a short sequence between Annie and Dean at the diner after “The Squirrel Incident”. It provides a stronger foundation for their otherwise rather spontaneous relationship.

The second addition is set at night in the junkyard after the Giant sees the deer die. Sleeping, he has a nightmare that hints at his true, warlike purpose. The dream is broadcast to Dean’s nearby TV, interrupting “The Jack Parr” show with images of robot armies destroying worlds. It’s an interesting expansion of the Giant’s story that further foreshadows the last act.

The remastering did look great, but I may withhold final judgement until the Blu-Ray is released. It often seemed washed out, especially in the darker scenes, but that may very well be an issue with the particular theater I was in. The movie was followed by an extended sneak-peek of the “making of” documentary that will be included in full on the Blu-Ray.

This Blu-Ray release will be the first chance for many people to see this amazing film. It will also be the first time fans can see it in high-definition. I am a 44 years-old father of two. I’ve survived both cancer and Matthew Broderick’s Godzilla. This movie reduces me to tears every time I have the privilege to see it. It makes me feel like a better person just for watching.