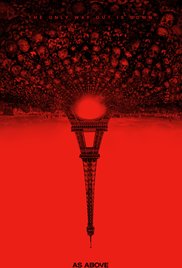 “As Above, So Below” on IMDB

Found-footage is a genre that just won’t die. The well is fouled and rank, but Directors keep dipping in, audiences keep lapping it up and, yes, I keep reviewing them. Gimmicks distract, even when used well, and this is one gimmick that’s run it’s course. It does nothing positive for this movie. We get video from handheld cams, helmet cams, body cams and, like all found-footage, impossible cams.

Scarlett (Perdita Weeks [IMDB]), is a brilliant, driven young woman. She’s out to prove her late father’s theories about the existence of the Philosopher’s Stone, a legendary alchemical substance able to convert lead to gold and provide immortality. Her work is the subject of a documentary filmmaker because, found-footage.

The first act is… pretty good, actually! Scarlett’s drive is infectious as her search leads her to Paris and the hundreds of miles of catacombs that lie beneath it. Weeks gives a solid, believable performance as do her documentarian, Benji (Edwin Hodge [IMDB], who is also a black man in a horror film, so don’t get too comfortable with him), and her reluctant colleague, George (Ben Feldman [IMDB]). There’s a surprisingly effective “Indiana Jones” vibe at the beginning; something I find irresistible.

The story, as so many are, is based on the legends of Nicolas Flamel, a 14th century Parisian scholar. He became notorious in the 17th century when his name was used to sell various alchemical books. The legends claim that he had successfully created the Philosopher’s Stone and gained immortality. The early scenes in Paris, the best in the film, are of actual sites and artifacts related to Flamel.

Scarlett enlists the help of some local – but decidedly unsanctioned – catacomb experts. After evading the police and crawling through a sewer, they begin their search. The catacomb footage here is interesting (reportedly the production was the first to get permission to film there), but ultimately wasted. Predictably, the expedition goes absolutely pear-shaped almost immediately. The movie as a whole quickly follows.

After a cave-in traps the group, they must struggle through an increasingly surreal and horrifying reality. Some interesting set-pieces and brief flashes of brilliant psychological horror can be found strewn amongst a barrage of more pedestrian jump scares. As the danger grows and the story moves forward it becomes painfully clear: the movie has no idea what it wants to be.

I could have been a straightforward, but effective, “let sleeping dogs lie” movie. The horror could have stemmed from defenses related to the stone. The search for the stone does spawn some interesting moments. Many are effective, but also feel out of place as the movie relies heavily on jumbled Egyptian and Middle Eastern design. The supernatural terrors that the film relies most heavily on don’t seem connected to the stone in any way.

Much of the horror is the result of tormenting the characters with whatever they carry the most guilt over. No reason why this happens is ever given. The movie weirdly implies that the the catacombs are the source of the apparitions, yet they begin to appear before we enter them. There are also fleeting scenes of supernatural revenge and even hints of plotting cultism, none of which are ever explained.

In a nutshell the movie says that the vault of the Philosopher’s Stone coincidentally rests near a gateway to hell and under haunted sewers populated by vengeful ghosts where, also coincidentally, murderous cultists sometimes hang out. It’s sad because, even with the problems inherent with found-footage, there’s some good stuff here.

Individual scenes are often impressively effective, yet fall apart completely when considered as as a cohesive story. Strong performances, solid technical work, an engaging first act and, especially, gimmicky camera work simply can’t save this muddled mess from itself in the end.