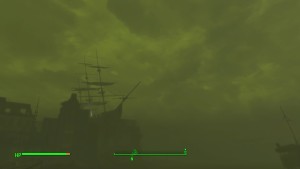 The U.S.S. Constitution seen breaking the horizon during a radiation storm.

I continue my play diary of Fallout 4. I moved the story forward today a bit and found my second favorite quest of the game so far (it’ll take a lot to top The Sliver Shroud from Day 13): Last Voyage of the U.S.S. Constitution.

The Constitution has always fascinated me. The ship was launched in 1797 and christened by George Washington. It was the third frigate to be built for the fledgling U.S. Navy. Built in Boston, she is the oldest active commissioned warship in the world. She was never bested in battle and, in fact, is the only active ship in the U.S. Navy to have sunk an enemy vessel. She received her nickname, “Old Ironsides” from her pitched battle with the Guerriere, a British frigate, during the War of 1812 when the British became convinced that their cannon shot were bouncing off her hull.

In the Fallout universe, apparently, the ship was heavily modified for reasons. Who could argue that strapping rockets to a 300-year old wooden ship is a bad idea? Well, I suppose somebody could argue that, but they would be wrong.

With a Little Help from my Friends 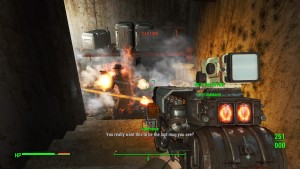 Companions, in general, seem to have enjoyed absolutely no improvements since the earlier games. In some ways, in fact, they seem to have gone downhill.

I’m not sure if each companion has different behavior parameters, or if I just got lucky with Nick, but day-am is that mechanical boy annoying. That image to the right is Nick antagonizing a very nasty turret I was planning on sneaking up on. He seems to wander ahead much more often than other companions, although they all have their moments.

Here, I’m trying to convince Deacon to let me get back through a doorway:

This is often a minor annoyance, unless, you know, I’m trying to avoid a super-mutant suicider. 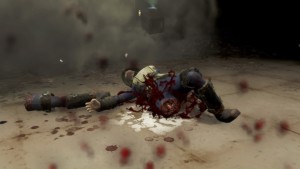 Yes, MacCready, this is all your fault.

They open doors I’ve not yet opened, enter rooms or areas before me, and generally, alert everybody with an urge to kill me to our presence. Once battle is engaged they have a definite tendency to stand directly in my line of fire and use tactics diametrically opposed to my own. If I’m sneaking, they run headlong into the fray. If I run in guns blazing, they often wander off.

Considering this, I would like to suggest some potential new etiquette rules for companions:

Many of these may have been too calculation intensive for earlier platforms, but seem more reasonable considering the base horsepower expected today. I still love my buddies, warts and all, but wouldn’t actually miss the warts. 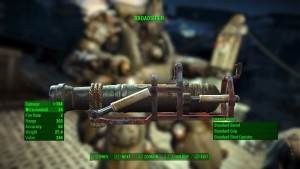 Save the Constitution and gain the most impractical weapon in the game.

I had planned to immediately head to Goodneighbor and continue the story, but first responded to a call for assistance at Finch farm. Seems they were having some trouble with a Gunner outpost situation on the elevated highway near them. One of the elevated gunners had a Fat Man and I died. Cheaply. Several times.

Walking into the ruins of Boston from the farm led me right into the U.S.S. Constitution, stranded by the treason of the thrice-damned Weatherby Savings & Loan building! The robot crew of the ship was, at the electronic prodding of the proud Captain Ironsides, defending the ship from a hoard of scavengers. Although I could have made the wrong choice and sided with the scavengers, I decided to support the crew of the beleaguered vessel. 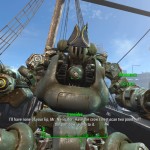 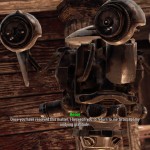 The crew had seen better days, but were true to their mission. 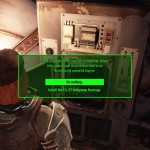 Name one reason why I wouldn’t want to pump massive amounts of fuel into a wooden rocket!

This involved, of course, several battles and a few fetch quests for parts. The ship itself contained a much appreciated issue of the U.S. Covert Operations Manual, but not much else. After completing repairs and repelling a final, desperate attack by the scavengers, the ship was ready. I stood, saluting, as the ship roared gloriously to life! 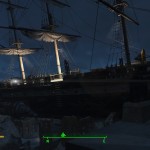 All ahead full, Captain! 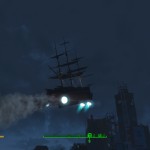 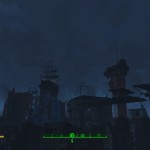 Checking in on them later, I was happy to discover that the crew was pleased to be closer than ever before to completing their mission. 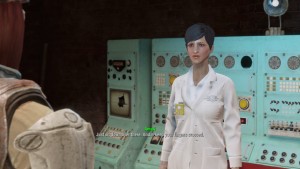 Getting back on track, I headed straight to the Memory Den in Goodneighbor to consult with Doctor Amari. She was unsure that any useful memories could be pulled from the random chunk of Kellogg’s grey matter that I had, but immediately hooked both Nick and my brains up to dangerous machines anyway.

I wasn’t thrilled with Kellogg’s character in the first place. I found him cliched in all the wrong ways. I was happy when he died, that I wouldn’t have to deal with him any longer. I was wrong. 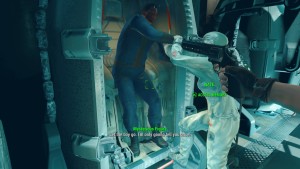 I got to relive Kellogg murdering my tubby husband, again.

The entire mission provided us with a massive exposition dump for this character that I didn’t care for in the first place. I’m not sure why they went to such efforts to humanize Kellogg, but I would have been perfectly happily with a synopsis of Amari’s findings.

At least the effort was fruitful. We learned that The Institute leverages teleportation technology to control traffic to its otherwise inaccessible base and that a renegade scientist might be able to provide details on how to infiltrate them. He was hiding out in The Glowing Sea, a heavily irradiated area to the South. 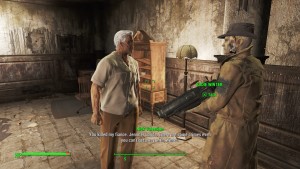 Nick got his revenge, but 200 years in that room might have been punishment enough.

Completing this mission pushed Nick into best friend territory and he asked for my help in tracking down a 200-year old gangster that had ruined his life. Actually, the life of his memory donor, I suppose. It’s still a little confusing, but dammit: if my friend Nick wanted it, we were going to damn well do it!

It involved collecting a number of holotapes from various police stations across the commonwealth. I had already collected many of them, but as I’m still avoiding Fast Travel it did take some time. 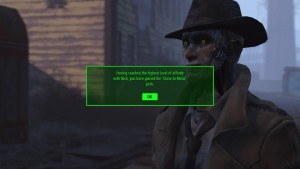 Collecting the tapes got us the password and killing a horde of raiders got us to the door. Inside was the notorious gangster Eddy Winter. He had spent millions  to become a semi-immortal ghoul long before it become fashionable. 200 years in and we was still a douchebag. I let Nick kill him. After a brief heart to heart, Nick confided that I was his everything and gave me his perk.

I rewarded his loyalty by immediately running back to Vault 81 and trading him in for a different robot companion, Curie.