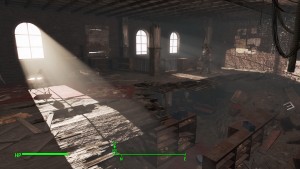 I continue my play diary of Fallout 4. I now have a growing collection of absolutely urgent, must-not-delay missions! Edward and Jack are waiting for me to tackle the raiders at the Asylum. Ellie is still waiting for me to rescue Nick Valentine. Preston and his men have been poised to liberate The Castle since Day Eight. Paladin Danse has been patiently waiting for my answer ever since Day Six.

So I, of course, ignored all of them to play super-heroes and scum-bags! You know what they say: Always be yourself. Unless you can be the Sliver Shroud, then definitely be the Silver Shroud!

Piper and I are Officially an Item! 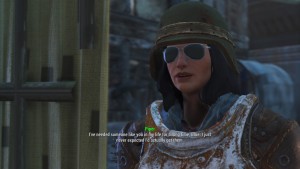 Piper, you crazy kid, you snarked your way into this sole survivor’s heart and set up shop. You’re my everything! My sun and stars! My sweet baboo! I just dig ya, babe!

After heading back to give Goodneighbor a more thorough look, I met the local shopkeeper, a ghoul. She requested that I clean the super-mutants out of the Boston Public Library. Since I already did that, I got a nice pile of experience just for showing up. More importantly, helping her out made Piper warm for my form, if you know what I mean. I reached out, she reached back and now we officially like-like each other. I also get a major bump in earned experience every time we sleep together – just like in real life! 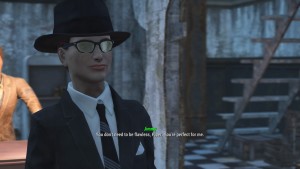 Jimmy and Piper, sitting in a tree!

Obviously now that I’ve sent Piper head over heels for me, I’ve traded her in for a new companion: MacCready the Mercenary. I met this former Gunner in Goodneighbor. This guy likes caps, hates trash and… I guess we’ll see! Don’t worry folks, Piper’s happily waiting for me up in Sanctuary Hills.

Continuing my tour of Goodneighbor, I came across the Memory Den and it’s sultry madame, Irma. She allowed me to use her neural pods to relive the horrific murder of my husband and child. She’s good that way. After seeing the crime itself, Irma also recommended that I hire Nick Valentine. I really should get around to rescuing him, I guess. 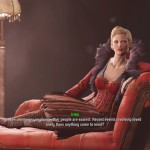 That’s exactly how I look at work. 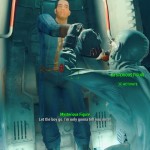 Look at the anguished complete apathy on my husband’s fat face as strangers steal his child. 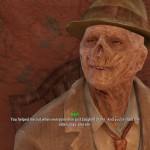 Kent’s my kind of people.

Before leaving the den, I stopped in to see Kent, a ghoul with a severe thing for The Silver Shroud. Finally, the stuff I collected from Hubris Comics way back in Day Four will be useful! Kent’s excitement was contagious, but overreached his physical ability. At his urging, I gleefully took on the sacred persona of The Silver Shroud!

Kent used his ham radio to alert me when local evil-doers that needed some “re-education” (read: “murdering”). Then he sent me to bring an assassin in a nearby building to justice. I faced down all of these challenges as the shroud and it was awesome. We even attracted the interest of the leader of Goodneighbor, the enigmatic Hancock:

Stay you, pal! Hancock told me that a local thug, Sinjin, was paying off a couple of gangs to hunt me down. With his tips, I was able to infiltrate deep into Charlestown and Cambridge to get the jump on them. That led me to Sinjin himself, who was holed up in the Milford General Hospital.

After clearing the hospital, I found Sinjin holding Kent in the basement with a gang of henchmen to back him up. This was a difficult and glitchy segment; one that I failed several times. Often, the thugs opened fire before the dialog even began; at least once before the elevator doors even opened. When things proceeded correctly, I used the same dialog options each time, yet continually failed to save Kent or myself. The last time, though, the last time went perfectly.

Hopping yourself up on a cocktail of drugs and shooting the bad guy in the face (with a critical hit, no less) may not be the most super-heroic thing to do, but it does get the job done. Kent was a little too shaken up to continue, which is likely good. I remember something I was supposed to be doing anyway? Something about a baby?

In my last entry I was complaining that the quests seemed too simplistic; I even suggested that they might be getting dull. This changed all that. This is, far and away, my very favorite sequence in the game so far. I love Kent’s glee at seeing his childhood hero realized, love that I can play the missions as the Shroud and love that – if you’re quick enough, at least – you can actually have a happy ending.