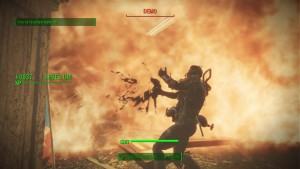 I continue my play diary of Fallout 4. I was forced to delay this update because of a last-minute business trip to New Jersey… so it was exactly like Fallout! Ha! Rimshot! Jokes about New Jersey are sophisticated comedy, people! Just like mocking airline food or doing terrible impressions of whatever minority are supposed to be bad drivers!

In any case, I spent more time in Covenant, did some errands, and got closer to my new best friend Piper. I also met a very odd family and a very angry deathclaw. I also broke down and put a perk point into Armorer because I was feeling a little exposed out there. I now have a nice set of matching “shadowed” armor to help with my sneak. 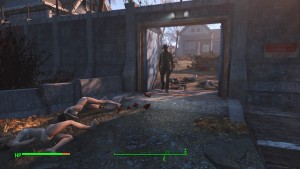 I want to quickly follow-up on Covenant. As I mentioned previously, I returned to the town in the hopes that, even though I killed all of their robo-bigoted friends in the sewers, I could somehow convince them to be my buddies. I couldn’t. The second I showed my face they got all angry and shooty, so I got all angry and shooty and things didn’t go well… for them.

So now I have a new town. One with a stack of nearly-nude corpses piled near the front gates. Unlike the previous games, you can’t seem to move the corpses manually (the game tells me they’re “too heavy”) and pile them up behind one of the houses; so at the gate they sit. 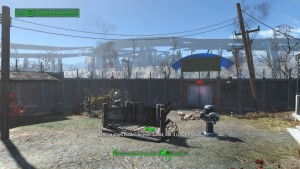 Plumes of oily smoke is what makes home, “home”.

As the mounted heavy turrets on the walls didn’t attack me while I was scrapping much of the town, I naively assumed that they were “mine”. No such luck. Once I built a turret of my own, it started duking it out with the ones on the wall. After fiddling for a while, attempting and failing to move/store/repair the original turrets, I smashed them all. Now I’m unable to clear the wreckage away or mount new ones on those oh-so-attractive platforms. Covenant’s most distinctive features at this point are permanent, smoking husks lining its otherwise pristine walls. 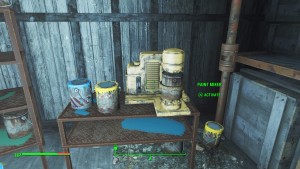 I decided to clean-up some of the quests/locations that I’d gathered and I started with the request to find more special green paint for that, um, “monstrous” wall in Diamond City. Hitting up the hardware store, I had to face down raiders, but finally found what I was looking for. Sort of. I needed to mix the blue and the yellow paint in a mixing machine to make green.

I was absolutely positive that once I engaged this loud, rattling machine that we’d be inundated with raiders. Since there was enough paint to make three gallons of green, I assumed that we’d do this three times. I geared up. I readied my trusty poisoner’s hunting rifle. I placed the paint in the machine and… nothing. Not a thing. I just mixed three gallons and left. 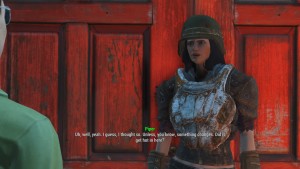 Piper is so damn cute when she blushes!

I am loving this game with a brooding, nearly criminal passion. I’m also noticing a lot of missed opportunities. Many of the quests seem ever so slightly… not exactly dull; perhaps “uninspired”? I’ve probably just hit a slump.

Leaving the hardware store, Piper asked for a word. She was concerned about her little sister and needed my advice. I used the opportunity to shamelessly flirt with her. I’m helpful, mind you, but also kind of a me person. 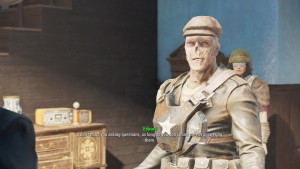 Edward and I are going to be best friends.

I fast-traveled back to Diamond City to drop off the paint, then over to an interesting location that I had uncovered, but not explored: the Cabot House. Guarded by a couple of non-aggressive robots, I assumed that this wouldn’t be a raider crack-house, so I put on my talkin’ clothes and buzzed the intercom. A decent, but tight-lipped, ghoul named Edward let me in and introduced me to his (maybe!) pants-crapping crazy boss, Jack. They needed to me to head North, to an old insane asylum, and recover a case. Why not? 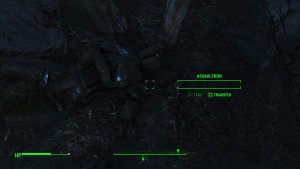 Hi, I’m a huge pain in the ass! Brought to you by General Robotics.

I headed across the nearby bridge and into Cambridge. It was a fairly uneventful trip until I met my first Assaultron. Traveling with a Mr. Gutsy and prone to attracting nearby super-mutants, this little bugger took several attempts to deal with. I finally took him down with a combination of high-caliber weapons, dangerous drugs and a not-insignificant amount of luck. 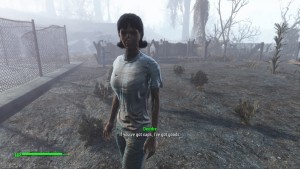 You’d think after 200 years of ghoul-dom gravity would, you know, make an impression.

The battle did leave me with a handful of agitated super-mutants, which I cowardly murdered from the bushes with my sniper rifle. I’m beginning to grow concerned about my stock of .308 ammo; I’m relying on it a bit too heavily.

Beyond the super-mutants was a lovely little farm run entirely by ghouls. Thrilled that I took out the super-mutants, they joined the Minutemen on the spot. I was able to get a good night’s sleep and start fresh for the asylum in the morning.

I did have one additional adventure on the way. As I crossed over a collapsed highway, I caught movement ahead: a deathclaw! He hadn’t seen me, so I decided to lay a trap. A lunchbox mine kind of trap. (In the first few seconds of the video you can even see him curl for a little nappy-nap. Ain’t he cute?!)

I might have over-estimated him a bit by using three mines (the extra double-damage sneak-attack helped immensely), but better safe than sorry. The car exploding; that was really just icing on the cake. I was able to reclaim one mine (and the many splattered caps). 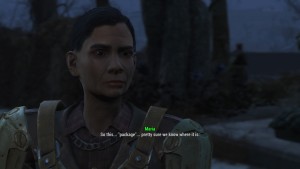 A good face for mercenary work.

I reached the asylum and talked to the oddly shaped Maria, who informed me that a gang of raiders was set up nearby and was likely the culprit. I interrogated them, with bullets, and retrieved a single vial of the mysterious serum. Returning to Edward and Jack, I had the option to lie about finding even that, but I played it straight. After a family squabble, they sent me back out to track down the black-sheep of the family, Jack’s sister Emogene. 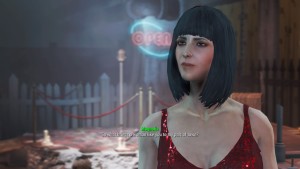 Sultry, irradiated lounge singers are a weakness of mine.

The trail led to the community of Goodneighbor, tucked around the Old State House. In our timeline it was built in 1713, if the same in Fallout, it would be nearly 600 years old! Emogene frequented a local bar, the Third Rail, located in the old subway station. Speaking to the lounge singer there I learned that she had taken up with a  smooth-tongued cult-leader who ran the group occupying the amphitheater.

I was worried, since I had already – purely by accident! – killed everybody there. Was Emogene among them? Happily, no. A new shuckster had taken residence and was holding the girl. He was remarkably easy to intimidate into releasing her. She immediately started whining, but my job was done. Returning to Cabot House for my reward, I learned that the asylum was under attack! Quickly – there was no time to spare! – I wandered off in another direction; probably distracted by something shiny.