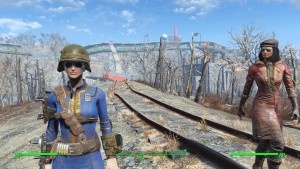 Just two Ultimate Badasses, out for a walk.

I continue my play diary of Fallout 4. Today was a short session as life got in the way rather rudely. I got caught up in a problem at work. Don’t people know I’m playing Fallout 4?! Where are their priorities?!

Even with that, I do get in a bit of wandering. The most notable part of which was poking into an innocent looking corner and finding a not-so-innocent looking deathclaw. I also got a new level and, grudgingly, continued to raise my charisma in order to reach the Local Leader perk.

Remote Play on the PS Vita

I’d like to quickly relate something my son and I have been trying out: Fallout 4 remote play on the PlayStation Vita. Long story short: it works! It works very well! Remote play is possible for pretty much all PS4 games, although most use the default (and painful) default control scheme which maps the missing R3/L3 and trigger buttons to the Vita’s rear touch pad.

Happily, Bethesda put some actual thought and effort into creating a much more intuitive default layout. The edges of the front touch screen are linked to grenades while the center changes point-of-view and activates the workshop. Other controls, like V.A.T.S. and Sprint, have been moved to the directional pad. It takes some getting used to, but is surprisingly intuitive and completely usable.

As always, your mileage with remote play will vary with the quality of your wireless signal. For us, it’s smooth as butter with absolutely no artifacts or lag. The Vita screen is small, especially for all that tiny type and subtly hidden loot, but it’s also gorgeous. We’re able to play the game perfectly well using it. Still, some players may be more comfortable leaving the new exploration to the big screen and using the Vita for inventory and settlement management while they allow their significant others to finally use the TV for once. 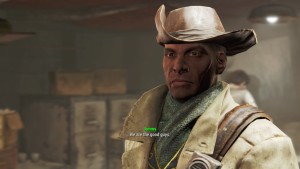 At Preston’s request we headed out to liberate (read that as “kill everybody that lives there”) Outpost Zimonja at the extreme north edge of the map. At more of Preston’s prodding, I built a radio beacon at the outpost; he’s a good guy, but a little demanding. He was pleased with the situation for nearly seven seconds before he suggested that we immediately organize an all-out assault on The Castle, the old Minutemen headquarters.

To hear him tell it, the entire place was lost decades ago when it was attacked by some kind of giant sea monster. But, hey! I’m sure it’ll just be a little dusty when we get there, right? In any case, I wanted to wander a bit more, so I sent him ahead to get things ready for the assault. I then spent a while doing the the load-screen jamboree as I moved supplies and settlers to my new outpost. I really can’t wait until I can finally set up some supply lines! 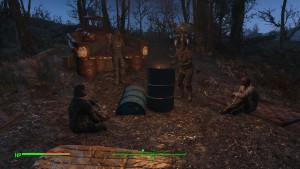 Ron Staples and his band of inebriated wastelanders.

As we were close to the Old Gullett Sinkhole, one of the unexplored areas I found on my tour with Lucas Miller from Day 2, Codsworth and I decided to take a look. On the way we ran into Ron Staples and his wandering booze cruise.

When we got to the sinkhole, I couldn’t see anything so we headed down and found a nice chest full of stuff. Then we crapped our pants (this was very impressive for Codsworth) as a deathclaw came waltzing out of small ruin right on top of us.

We bravely ran away. Then we bravely spent way too long taking potshots at him from the rim of the sinkhole, chipping away at his health; there was some brave running away during this as well. When he eventually worked his way out of the sinkhole, we – very bravely, mind you – led him right into the laps of Ron and his friends.

I also realized about halfway through the battle that I was down to less than half my health due to RADs. Yes, folks: I’m just that observant! No, everybody didn’t survive, yet those that did acquitted themselves very well for a band of wandering drunks. The real point here is that I survived.