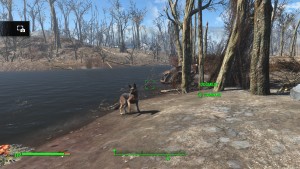 Me and my pooch on a walk in the woods.

I continue my play diary of Fallout 4. Today was a good old screw around day. I decided to revisit a few places to see what I might have missed, grab a few things that I knew I missed and generally goof off. I wandered around, revisited some areas and discovered that my dog is a wizard.

It was a lazy session, so no new levels or perks. Every once in a while you just have to settle down and soak up some life.

Yes, My Dog is a Wizard!

My dog is magic. Hard to believe I know, but it’s true! I decided to revisit the vault. I missed the first Pip Boy game, Red Menace, when I left. I noticed it when my son started playing (as a platinum blonde black man with ice blue eyes that wears sequined dresses and a chef’s hat). Me and the dog headed over and I set him to looking for anything else I might have missed.

He looked around for me, but then I made him wait a little too long (1:39 in the video) so he conjured a teddy bear from thin air to entertain himself! Then I asked him to look for more look and he transmuted himself through a locked cabinet (2:00 mark)!

So I got a nifty gun. I’m still trying very hard not to expose myself to spoilers, so this was a great surprise to me. Apparently not to anybody else, but I giggled dammit.

In addition to revisiting the vault, I also stopped in at the Olivia station and ArcJet again and sicced my magic dog on some items I missed, although sadly nothing very impressive. As I approached Oliva I picked up the perfectly good power armor frame I left standing in the woods for no good reason. When I first saw it, I stupidly stripped it of parts thinking that I would repair “my” power armor and left the frame standing there. It wasn’t until later that I realized the frame was more than just a pretty stand for the armor plates, so I went back to retrieve it. 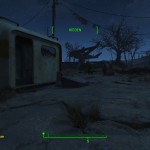 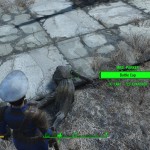 Mrs. Parker is dead, shot in the head. 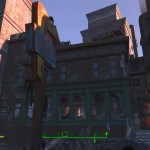 Loving the open encampments: lots of wonderful windows to through Molotovs in. 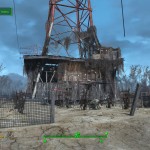 Abernathy farm has a very nice house, a lot of food and absolutely nothing else. 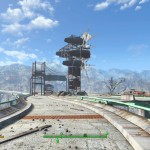 The Gunners had a nice little set up on the highway. 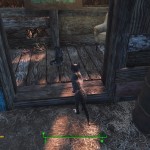 I also spent some more time in Boston and found a bunch of named, but still nasty ghouls that I’m assuming are part of some quest I’ve missed. Mrs Donoghue, Mrs. Parker and her friends gave me some trouble, but I finally squashed them in the end. I also found Abernathy Farm and, since I had already cleared the Olivia Station, was immediately able to convert them into a Minuteman settlement.

Finally, I got drawn into an extended battle with The Gunners on one of the elevated highways. This netted me my first actual, non-homemade sniper rifle, a nice pile of ammo and a good number of turret parts. More importantly, on my way back, I found a crazy cat lady! Yes, Internet: cats have survived the apocalypse.