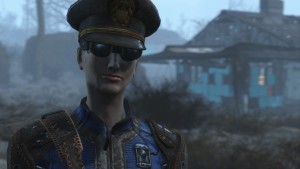 I continue my play diary of Fallout 4. Today I dug into the crafting and workbench systems. I understand them more than I did, but am still far from comfortable. I also had the chance to do some character building, planning and a little regretting.

Most of the day was spent in the surprisingly enormous Corvega factory battling a veritable army of raiders. I capped off the day by taking a little tour of wastes with my new buddy, Lucas Miller. 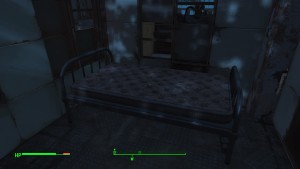 That’s a bed. I made that. I can smelt iron and quilt a mattress, but the technological intricacies of sheets and pillows elude me!

I pushed through the mini-quests to outfit sanctuary hills. There were a number of false starts as the entire process of community building is given almost no explanation. At first I didn’t realize that I could scrap things in the environment to make room, so I built a nasty little shack in the middle of the road. Once I realized that I could scrap things, I tore it down and scrapped everything, being under the assumption that I could rebuild anything I needed. You know what they say about assuming: don’t do it.

Turns out you can’t build everything you scrap. Complex items, like workbenches, require the second rank of the “Local Leader” perk (which unlocks at level 14) and other items, like picket fences, can’t be crafted at all. For these items you must either leave them as they are, or store them for later use. In any case, once I realized that I destroyed all my workbenches, I reverted to an old save.

As for regular crafting, I’m getting the hang of that much more easily. I have determined two things: a) apparently screws did not survive the apocalypse very well and b) I’m going to have to dump a lot of upgrades into crafting perks to do anything really cool. At the moment I’m ignoring those perks. I want to see how common modified/higher-quality gear will be in the world in general before I dedicate my upgrade opportunities to it.

As far as personality goes, I’m playing as a kind-hearted goody two-shoes with a minor streak of impishness. I’ll be nice to you and save your settlement, but I’m going to take all your tato’s as well. Here’s a little video of me and robot getting chummy (if you skip to 1:49, you can hear him call me “Miss Jimmy”, which is still awesome):

As I noted in the first installment, I’m not enjoying the new perception/compass marking system. I keep finding myself in “caution” or “danger” with no concept of where the threat is coming from. I pushed perception up to keep from being surprised and I’m constantly getting surprised. I also tossed my free point from the You’re S.P.E.C.I.A.L. book in Shaun’s room into Luck, hoping it would pay off in higher critical chances. 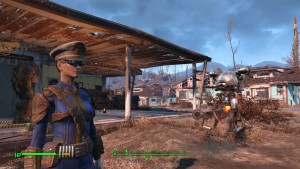 Me and buddy Codsworth: ready to go serve some justice!

I decided to play things straight – mostly – and take Preston up on his request to help the poor people of Tenpines Bluff. I took a rather circuitous route to get there and found the Robotics Disposal Ground, Ticket Excavations and the Satellite Station Olivia. The new sentry bots are impressive. I cleared the Satellite Station, but experienced my first non-deathclaw death at the mini-gun of Ack-Ack. I’m also getting annoyed at not being able to hack terminals and may dump a point into Intelligence to make the perk available.

I reached Tenpines Bluff to find two people in a shack with a bunch of Tato plants. It didn’t scream out “community” so much as “hermit plus one”. Of course they’ve been having trouble with raiders and, of course, I offered to help. Turns out the raiders were in the Corvega factory in Lexington; a hella long away. 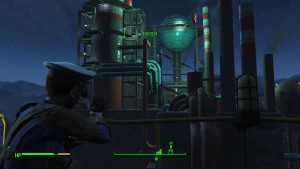 The Corvega factory is enormous and highly vertical.

I got mobbed by my first crowd of feral ghouls at the Bedford Train Station. Ghouls are much more aggressive and much more zombie-like than previous games. Mobs of ghouls look to be norm as well. They also look awesome; bloated, warped and dressed in the same ragged clothing you can find on your travels.

I diverted to a few other locations on the trek, but eventually ended up at the Corvega factory. I drastically underestimated the size of a raider party that would be held at bay by a two-person community. The factory was huge and was crawling with raiders, inside and out; perhaps 50 in total. I tried sneaking over, but died several times so I changed tactics.

I first snuck up to the overpass in front of the factory and used my homemade sniper rifle to take out about a dozen of the raiders outside the compound. The herd thinned – and having no more .308 ammo – I then snuck around the back of the facility and methodically took out the rest. Don’t miss the raiders hiding out in the truck trailer (you can open some truck trailers now!) or, way up at the top of one of the catwalks, the Repair Bobblehead. 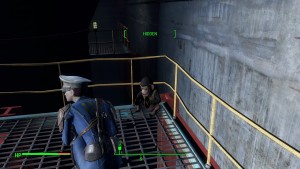 The inside was much the same, but again, so much larger than I assumed it would be. Completing the actual quest only requires killing the raider leader, something run-and-gun characters may be able to do very quickly, leaving most of the raiders alive. You can also leverage the fact that cars still create insanely impressive explosions and the production floors are littered with them.

Clearing the entire area is another story. There are multiple floors, basements, offices; all riddled with catwalks, cubbies and infrastructure. You also have to stay on your toes: in at least one case, after killing off a couple of bandits and a turret, I was attacked from behind by a small group of ghouls that broke through a grill at the back of the room. This is not a lark. It’s a serious campaign. If this is representative of the environments we’ll be seeing, I’ll have to adjust my time and effort expectations. 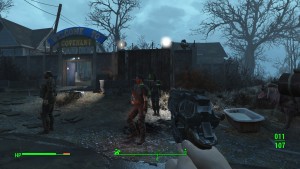 Me and my buddy Lucas Miller outside Covenant.

When I finally took word of my victory back to the two anonymous settlers that sent me to my death (multiple times), I was pleased to find the traveling caravan of Lucas Miller settling in for the night. On a whim, I decided to follow him since it never hurts to have three extra heavily armed people with you.

He wasn’t in any hurry, and his route stuck to the road. It wound through Medford and Malden. I met my first group of Super Mutants and a small team of Synths. I would have never survived either alone and I was able to pick up my first really useful energy weapons from the synths. By running off the path when they faded into my compass I was able to add about 10 new fast travel locations to my map. 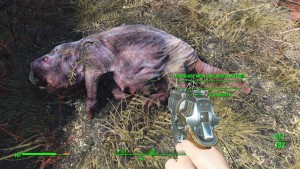 Take that wildlife! Take it!

The first stop was a tiny community, Greentop Nursery. Since the caravan was settling in for the night, I wandered a bit and attracted the attention of the Legendary Mole Rat Brood Mother, whose ass Codsworth and I promptly kicked. She dropped a custom piece of armor that gives me +15% damage to ghouls, so the trip was worth it, at any rate.

The caravan’s last stop was Covenant, an intriguing place I’ve yet to enter, but high on my list. On the way there, we disturbed a nest of Bloodbugs, which are quickly surpassing bloatflies as the most annoying enemy in the game. I also got to see some of my first glitches as the caravan lost its brahmin, have it pop in later and then have its leader get stuck in a tree. I had to push him out to get things moving and he didn’t even thank me for saving his life.

I ended this session brushing up against level eight. Next time I’ll likely trade in Codsworth for Preston Garvey and see about completing some more of the Minuteman quests. Sorry, Shaun, but I’m just not in that big of a hurry to find you, buddy!