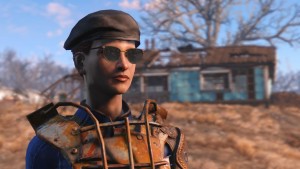 I, like everybody else, have started my play through of Fallout 4. Since I’m a father with a job I can’t do the whole “let’s play” streaming thing. Instead, I’m going to do a series covering my gameplay highlights and thoughts as I progress.

By way of background: I’ve worked hard to avoid spoilers for this game. This likely means that I’ll make some silly mistakes, but I’d rather experience the game as freshly as possible. I have, of course, played all of the previous game in the franchise, and I hope that experience serves me well here. I’m playing on the PlayStation 4 and all media are native captures from that system.

Having lived most of my adult life in the Boston area I am amazingly excited that one of my favorite franchises is now set there. That said, I’ve gotten nowhere near Boston in the time I’ve played, so I’ll have to comment on that later. I do adore the fact that many of the NPCs have authentic Boston accents tho’.

Fallout games, due to their extended development cycles, tend to fall behind others graphically. There are nits to pick, but I surprisingly have no complaints on that score. The game is gorgeous. The environments are richly detailed with a soft, ever-so-slightly cartoonish quality that I’m extremely impressed with.

I enjoyed the pre-war prelude and would have loved the opportunity to spend even more time there. I like that the character creation was embedded within the story, but still simple and straightforward without the tests and hoopla of the previous games. The full voice acting and subsequently more limited dialog options haven’t bothered me in the least.

Enemies seem dramatically more aggressive than previous games; or at least the lower level radroaches, molerats and ghouls that I’ve been meeting are. I’m also very pleased with the redesigns of the mirelurks and the deathclaws. Both seem radically more animalistic than previous games, where they were oddly humanoid. The new, scuttling mirelurks look properly crustacean and the deathclaws have thick, expressive tails and move more like the lizards they were spawned from.

My only real complaint at this point is that the new perception system is annoying me to no end. Not being able to see enemies on the compass before they spot you is putting a serious damper on my sneaky ways. I feel like I’m constantly being surprised by things that my high perception should have made me aware of and that I wasted S.P.E.C.I.A.L. points by boosting it. 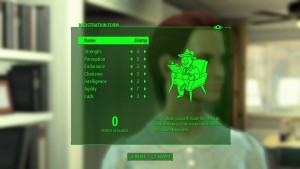 My S.P.E.C.I.A.L. build for what I hope is a sneaky, slippery assassin.

As I generally do, I’ve decided to play the game as a hot, redheaded woman. Sue me, I’ve got a type. I called her “Jimmy” because it seemed ever so slightly more feminine. I was floored when my fully voiced robot butler started calling me “Miss Jimmy”. Truly, it made me ever so happy.

I also made my husband as fat as possible. Because.

One of the problems with keeping ignorant is that I really have no idea how to build an optimal character. I started by setting all my attributes to a minimum of three because I don’t know what effects super low stats could have. I generally play as a sneaky, ranged nerd that leans heavily on V.A.T.S. so I pumped Agility up to 7. I also pushed Perception up to 5 because I hate being surprised and tossed the last point in strength for the carry weight.

After escaping the vault I, as is intended, headed home to find my whiney robot. Taking his advice I headed out to Concord. On the way I met a dog and, eventually, set up a nice little shop at the Red Rocket Station (don’t forget to explore the cave below it for your first fusion core!) I’m just not groking the crafting system right now, but I was able to build myself a bed.

I reached Concord and got distracted by the sewer system. Very impressed with the sheer size of the town, even if I’m still disappointed that most of the buildings are shuttered. Eventually got drawn into Preston Garvey’s little war with raiders. I beat those raiders handily, got into my brand new power armor and took on my first deathclaw!

Deathclaws were always nasty, but this is a whole new level. After it was all over I kicked myself for not ducking into buildings to keep it at bay, but I think I acquitted myself well enough. I’m truly hoping the difficulty here is an indication that they will not be “common” enemies, but rather saved for significant events such as this. I can’t even imagine being able to take one of these down without the power armor at this point.

Finally, I saw Preston and his group of misfits safely to Sanctuary Hills, where they immediately decided to set up homesteads in the swiss cheese houses available instead of in the perfectly functional vault just over the hill.

Next time I plan on discussing my character building plans, the difficulty curve and that damn, inscrutable crafting system.