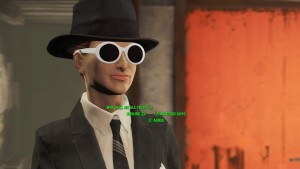 I’m all gussied up to head inta town!

I continue my play diary of Fallout 4. I continued my push south to support the Minutemen and, since Preston and I ended up so close anyway, finally reached Diamond City.

For the occasion, assuming that I’d be doing a lot of talking and trading, I put together my city clothes: fashionable glasses, a fedora and clean black suit to pump up my charisma to a respectable seven points.

I also broke down and spent two perk points on improving my Intelligence and the first rank of “Hacker” because I was getting so annoyed at having to ignore terminals.

Although the weather in the game has been very well done, it’s also been rather dull. The most I’ve had to deal with is reduced visibility due to mist and a general dreary feeling from rain.

That is, until yesterday when the sky turned into pea soup and started belching radioactive lighting at the world below!

I didn’t take many rads, but it was still impressive as hell and makes me wonder what else may surprise me in the future. I have noticed weird flashes in the sky, seemingly from the south, that I assumed would be explained later. Could they be more weather effects, or is something more nefarious going on?

In general, this game seems much happier to inflict rads than previous games. Ghouls, radroaches and other mutant enemies will inflict one or two per strike and even seemingly small radiation sources quickly climb to seven or nine rads per second as you approach. It seems rather cool insult to injury that you can also take rads simply from standing around in the weather. 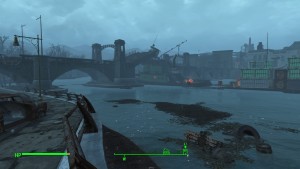 I did finally reach Boston and the Great Green Jewel of The Commonwealth, Diamond City; more about the trip, below. My first impressions of Boston are mixed, at the moment. As I said, I lived in Boston for 15 years and have a great love for the city. As my favorite comic shop, Comicopia, is in Kenmore Square, near Fenway Park, I spent quite a bit of time in the area. And this didn’t seem like “it”.

I know, for example, that they wouldn’t be able to recreate the Citgo Sign, but it is the primary visual landmark for the entire area… why not a Fallout Appropriate “Red Rocket” sign or the like? I believe the bridge pictured above would be, roughly, the Boston University Bridge. Of course, they couldn’t create the geography exactly, but why not at least mimic the architecture?

I’m likely being harsh and I’ve admittedly only brushed the surface. Just as it was in The Last of Us, another masterful, brilliant game set in Boston, this is more “Boston Like” than “Boston”. At least for now. Like The Last of Us, I expect to be more impressed by individual set-pieces, specific buildings and features, than by the geography as a whole.

In that vein, I adore the fact that there’s a quest based on the Freedom Trail. I’m also still loving the authentic Boston accents that many of the NPCs sport. Not being a sportsball fan, I can’t honestly say how true-to-life Fenway is, but as a Fallout community it hits all the right notes. It’s a little weird that my character, having lived pre-war in the suburbs, doesn’t seem to know more about Boston, but that’s games for ya. 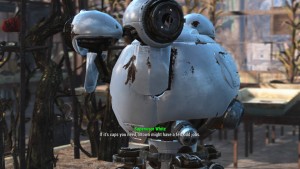 Having selected Preston as my companion, we headed out to Oberland Station to assist another settlement. On the way we encountered a lovely little colony of robot gardeners that asked us to help them clean up their water supply. We obliged.

That is, until we discovered that water was being messed with by a gang of super-mutants with rocket launchers who shrugged off my most powerful sniper attacks like mosquito bites. After being dead more than alive, we bravely turned tail, fled and continued on to the settlement. 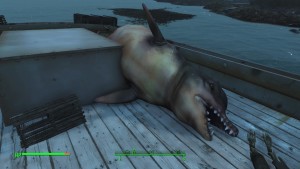 The “community” of two people was, surprisingly enough, being harassed by a gang of raiders. The raiders, it turns out, were holed up in Boston proper; in the Back Street Apparel building. Preston and I headed out.

On the way I picked some plants and took way too many rads swimming out to a nearby boat. The boat had almost nothing of value, but did have the carcass of… something. A mutated dolphin? I doubt we’ll see these alive in the game, but I wouldn’t be at all upset if we did. 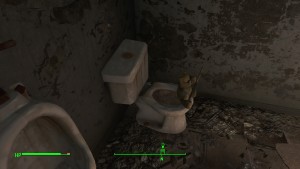 As we approached the city I, luckily, went into a defensive crouch just in time to be hidden from a gang of at least five super mutants wandering around the foot of a bridge. Again, they were armed with miniguns, missile launchers and an actual Fat Man. Way out of my (current) league. Happily, they ran off after some other prey and I was able to sneak past to my goal.

These raiders also had a few guards outside, and it’s clear now that raiders just love automated turrets. Dispatching them, we entered the building to hear a horrific story from a terrible person just before I made her head explode with a .308 round. 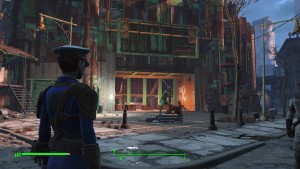 The entrance to Diamond City.

This base was much more “traditional” in scope than the Corvega plant, so we were able to mop up all the raiders in just a few minutes. Noticing that we were now very close to Diamond City (by design, I’m sure), I decided to at least activate it before reporting back to the settlement.

Diamond City feels odd to me, in a very good way. Unlike New Vegas or Megaton, surrounded by wastelands, or Rivet City, isolated by its catwalk, Diamond City is situated directly in the heart of a larger, hostile territory. As you approach, you’ll pass super mutants and raiders and, finally, begin to feel safer as you pass city patrols and guard posts. Unlike, say, Underworld from Fallout 3, you can also circumnavigate it from the outside. It’s, for lack of a better term, embedded in its world more than I’ve seen in previous games. 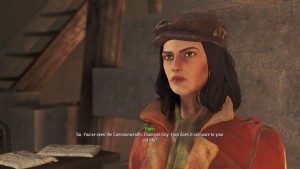 Piper Wright interviewed me! I’m going to be famous!

Having met rabble-rouser Piper Wright at the gate, I switched into my “Charisma Clothes” and did the rounds. Talking to people, picking up the odd job and doing some trading. I’m happy to see a Fast Travel point directly to the marketplace (I like to think that they were addressing some of the wonkiness of New Vegas’s weird Fast Travel network). I even took on a science experiment, but Preston wasn’t happy that I asked for cash to do it.

Speaking of Preston, I’m really pleased with the A.I. in “loitering” situations. Where they’re just as annoying in combat as ever (really guys, stop stepping in front of my bullets!) they act much more “normal” in quiet situations. While I was trading at the general store, Preston wandered off, sat himself down and ate some noodles. While I was haggling with the confused scientist, he busied himself at the weapons bench. He also interjects into conversations now and again. So much nicer than the glassy-eyed mannequins from early games that would haunt the backgrounds of conversations. 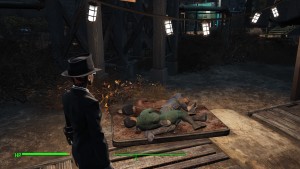 I also watched a guy get killed for pulling a gun on his brother. Apparently he was convinced that his brother was a “synth”. Paranoia seems to be the way of things here as I heard dark whispers about “The Institute”, their nefarious ways and the total lack of action being taken by the local government. I also tried to find the appropriately-named detective, Nick Valentine, to help me find my poor missing son, but of course ended up needing to rescue him before we could get started. Sorry Shaun! Mama’s (half-heartedly) trying!

I’m thinking I might pull back a bit tomorrow and go explore some of the map points I’ve activated. Covenant? The Lexington Super Duper Mart? Maybe the Beantown Brewery?