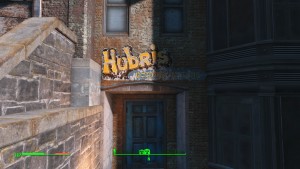 I can never resist a comic shop!

I continue my play diary of Fallout 4. I decided to wander around Boston, which turned out to be rather more dangerous than I expected. I also found several landmarks and one extremely pissed-off super mutant behemoth.

For my personal development, I added a rank to sneak, which will hopefully eliminate some of the deaths I’ve been suffering due to traps. I also added a rank to locksmith because I just hate not being able to get into places.

Earlier, I was a bit hard on the game’s presentation of Boston. Now that I’ve spent more time with it, I’m much more impressed; or at least accepting. Obviously, as they did with Washington D.C., Bethesda has taken the city and compressed it terribly to fit everything in. Landmarks are plentiful, and generally accurate (enough) but are situated oddly close together and surrounded by a rather generic “city” buildings.

So, for example, the Trinity Church looks like the Trinity Church, but is about a 10th the size, is situated among tight streets and generic buildings rather than the wide, open squares and plazas of Boylston Street and is only a few blocks from Fenway Park. Boston Common has taken the biggest hit, so far. It’s been shrunk to about one block square and combined forcibly with the Public Gardens and Duck Pond. 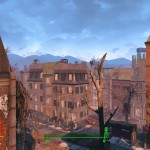 Most of the city seems Boston-like, but in a very generic sort of way. 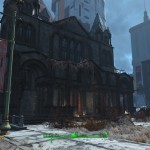 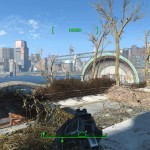 Haven’t been over to the Hatch Shell, but it’s on my list! 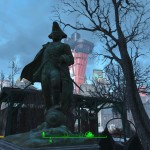 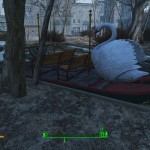 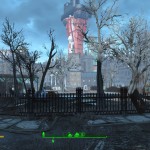 Boston Common is actually just a little bit larger than this.

That said, the details are what matters and, in that, there’s so much to love. No, the Swan boats aren’t actually in Boston Common, but the fact that they exist (and that a custom designed super mutant behemoth incorporates them into his armor) is awesome. 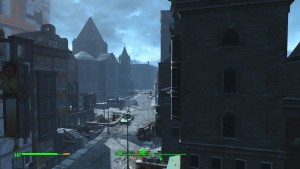 Boston is so much more dangerous than I remember!

I requested that Piper be my companion for a while, dismissing Preston back to Sanctuary Hills. After leaving Diamond City’s front porch we were attacked almost immediately by a pack of “Legendary” mongrels. We defeated them, eventually, with the help of Diamond City security, but I was near death for much of the battle.

I’m still working on getting the hang of the new V.A.T.S. system. The inclination, especially for players of the earlier games, is to wait until the last second to engage V.A.T.S., ensuring the highest chance to hit. Now, however, most enemies (at least fast movers like molerats, ghouls and dogs) have a last second lunge that means this tactic will likely get you killed. It’s a difficult transition.

I ran across Hubris Comics and I just can’t pass up a comic shop! Lots of ghouls (something that’s becoming a definite theme of the game )

The ghouls of this game are clearly inspired by “fast zombie” movies like “28 Days Later” and the “Dawn of the Dead” remake. The extended “I see you” animation from earlier games, which gave you plenty of time to headshot them, is gone as well. They may lie in wait, but once they’re up they’re up and running. You can sneak up on them, but while you’re doing so (as you see in the video) two or three more are likely to charge you from a hole or an air vent. 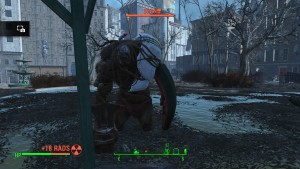 Swan isn’t happy with you. Ever.

I also did brief tour of the back bay on my way to the Combat Zone, which I covered above. If you’re headed that way, a word of warning: You might want to stay out of the duck pond. Apparently a super-mutant behemoth named, appropriately, Swan, has adopted it as his own personal hot tub. He doesn’t like to share. The “fact” that swans kill more people than sharks is a myth. This guy might beg to differ, but I didn’t wait around to find out.

Next time I think that I may relax a bit and try to build up my settlements. Maybe even figure out how to work the average population of them up past two people!