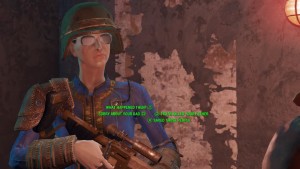 Less bad-ass and more “Beetle Bailey”, but it has such a high damage resistance!

I continue my play diary of Fallout 4. I helped out some robots today and had my first serious run-in with Super Mutants. I then spent way too much time (and not an insignificant amount of frustration) with the settlement crafting system.

After dying twice on mines, I took the third level of the Sneak perk. I’m still having trouble recognizing the new traps. I also broke down and took the first rank of Gun Nut and built a very nice sniper rifle, if I do say so myself. I’ve also taken to wearing a dirty army helmet since it accounts for nearly a quarter of my damage resistance.

I decided to spend a little while at the homestead, and this turned into a long while as I struggled with the community crafting systems. Firstly, I did some decorating. 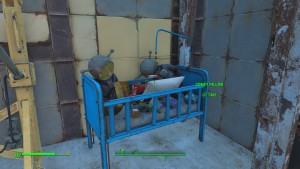 I decided, because I’m such a good mother, to move Shaun’s crib into to my workshop, right there, next to my power armor. Now (once I find him) I can look at him while I’m polishing my armored thigh plates. Babies like power armor, right?

Because I’m the best mother ever, I also decided to fill it with toys! And other things I know he’ll like: a comfy pillow, some aliens, a board game, some blocks and a few American flags (because ‘Murica!) Nothing’s too good for my still-a-baby and I’m-sure-there’s-not-a-twist-where-he’s-an-old-man-now Shaun, I tell you!

I did have trouble with the toy rockets – they move weirdly. It’s like you’re controlling the rocket and it pulls you around. Feels like a programming experiment that was accidentally left in. Here’s a video:

Since my community was growing due to the radio beacon I placed, I decided to try and actually wall the sucker in. This was an exercise in frustration, but I finally came up with something workable… ish. 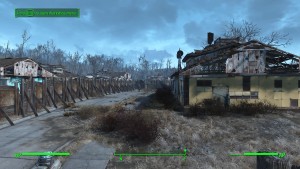 The main problem is that fences either connect too-well, or not at all. By “too-well” I mean that picket or wire fences, which are of little value in defense anyway, can only connect at straight or right angles when the geography of where you want them isn’t straight at all. Then there’s the “not at all” part where actual defensive walls (considered “structures” and not “fences”) don’t link together at all. You can try and place them close enough to create a barrier, but it’s difficult, especially if you need to curve or otherwise change direction. Forget about trying to connect with, or enhance, existing structures: the collision detection is insane. 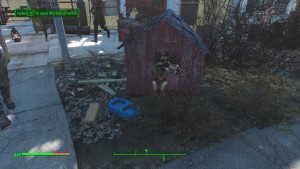 I did eventually get a wall surrounding my little community – at least two houses of it – with gates at both ends. Notably, an eight foot high wall around the entire place doesn’t add to my defense at all. Go figure. I have no idea how attacks on communities occur or are carried out, but I’m hoping that a big tall fence will at least matter then.

The entire community crafting experience is hampered most, in my opinion, by the overzealous collision detection. Being able to have fence segments overlap each other or a hedge just a little, would eliminate many frustrations. Placing a fence segment on uneven ground currently leaves one end floating in the air. Placing it in the ground, with the segment level with the lowest, not the highest point of the foundation would work (and look) much better.

I may change my mind later, but I think I’ll be doing bare bones, totally practical community building from now on. The frustration just isn’t worth it right now. 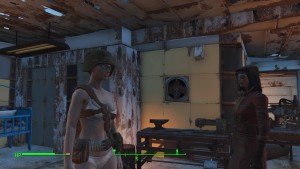 Piper says this is a good look for me, but I feel somehow… exposed.

My robot friends at Graygarden still needed help with their water quality. As I died (several times) in my first go, I spent some time at the workbench with my newly accessible level one mods and created a serviceable sniper rifle.

I also realized that, at some point, I had been wandering around without my vault suit – or anything else. How embarrassing!

My sniper rifle actually started as a pistol that I found on a Legendary Mongrel. After some tinkering I had a “Relentless Powerful Pipe Bolt-Action Sniper Rifle” that refills my action points on a critical hit. It’s slow, but does 51 damage at long range and, when used carefully, gives me basically unlimited AP.

I’m very pleased with the equipment crafting and the malleability of weapons specifically: I can take a basic weapon, with an attribute that I like, and mod it to maintain its usefulness at higher levels by increasing damage or other stats. I can also morph it from a pistol to a rifle or from a standard fire to an automatic  or semi-automatic weapon to better align it with my perk selections. 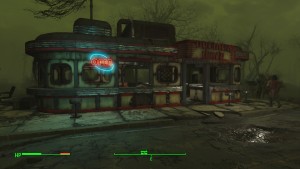 A friendly little family diner… in the middle of the apocalypse.

Since I was in no hurry to face the super-mutants, I decided to walk from Sanctuary Hills to the water treatment plant. I added a few locations to my map, including a lovely little diner-slash-trading post that I rescued from a couple of thugs. I remain amazed at how I can’t take fourteen steps without getting my ass handed to me by a mutated chipmunk, but an old lady and her drug addled son survive just fine alone, in a diner with no windows. 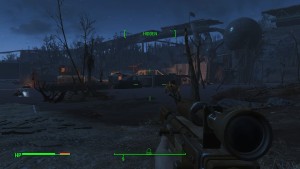 The water treatment plant and my sweet sniper rifle.

Eventually, I made it to the water treatment plant, and faced down the super-mutants. By “faced down” I, of course, mean that I hid in the bushes and took pot-shots at them from a very long away. This was time-consuming, but ultimately successful. I even snagged the mini-nuke from the suicide bomber.

Inside the plant things were significantly easier as Piper and I faced several very controllable waves of mirelurks as we corrected the technical issues. I now also own a baker’s dozen of mirelurk eggs, which I’m sure will be useful for something, eventually.

I reported back to the robots and enlisted them as allies. I then discovered for the nineteenth time that I can’t do anything really useful with settlements, like set supply lines or create trading posts, without the Community Leader perk. I begrudgingly spent my last perk point for the day on the first of three points of Charisma I need to unlock it.