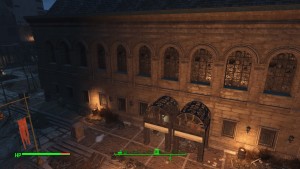 I continue my play diary of Fallout 4. I’m still having trouble getting the office to understand the gravity of my situation. I tell my boss: “I have to save the future of humanity!” He just ignores me and says, “Is that what you call spending an hour deciding how to dress your dog?”

Even without his support, I did get to visit one of the places I’ve been dying to see: the Boston Public Library. It was one of my favorite places when I lived there and I was very excited to see it realized in pixels! Did you know that it was the first free, public library in the world? And the first to actually lend its materials to patrons? I also visited a nice community of robots where only a few of them tried to kill me.

I raved about the quality of PS Vita Remote Play in yesterday’s entry. Today I decided to intrude upon my son’s gameplay and record a quick video of it in action:

You really can’t blame the Vita that he decided to go up against a behemoth with a musket. Still, he almost got the bastard, didn’t he? 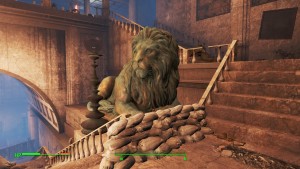 The lions of the entryway adorned with the corpses of super-mutants.

After hitting the Diamond City Market, I wandered down the block to the Boston Public Library. Like a good sneaky sneaker I slipped into the side door to get the lay of the land. I had already found a couple of overdue books, so I took advantage of the prize machine to collect some tokens, which I saved despite my lovely bride’s urging to spend them immediately on bubblegum. When the warnings started sounding about trespassers at the subway entrance, I found a dark corner and prepared. 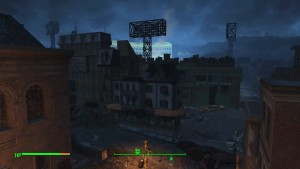 Diamond City from the Library.

I’m still relying heavily on my homemade pipe sniper rifle, but .308 ammo is in fairly short supply. My beefed up laser pistol is a problem solver as well: it has the largest magazine size in my arsenal and great DPS. Still, my current best friend is my gut-punching poisoner’s shot gun. I do love a weapon that continues to kill you (yes, you) even after I get bored with shooting you. It was very useful against the horde of super-mutants that were attempting to breach the library. 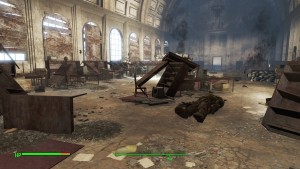 The reading room is going to need a broom and a coat of wax.

This is the Fallout combat that I adore: padding softly down unknown corridors working to get the drop on unknown enemies, only to have the whole thing go pear-shaped at the last minute. Then you struggle against suddenly impossible odds to bring things back under control. I’m not sure what the rules for legendary enemies are, but they seem to be remarkably common for legends. There were no less than four Legendary Super-mutants in this raiding party. 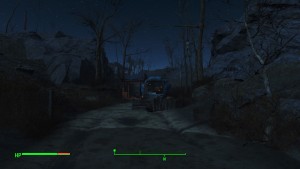 Just a couple of raiders deciding to take their half of the road out of the middle.

Completing the library I was pleased to find the Intelligence Bobblehead, but honestly saddened that I couldn’t actually help the deceased idealists that tried to rescue its treasures. I drowned my sorrows in caps as I headed back to the market to sell my loot. Then  we headed to Outpost Zimonja to drop off some much needed supplies. From there, I wandered down the road because, why not? It wasn’t like Preston and a small army of Minutemen were waiting for me to storm a castle or anything, right? 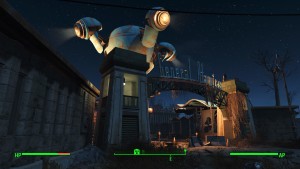 After dealing with an odd little raider camp and an irksome band of super-mutants along the way (aside: I love that super-mutants have lately become “irksome” and not “insta-death”), I ran across lovely little community of robots just waiting for somebody to come along and lead them… in commerce! I felt like this was going to be a “deeper” area; maybe even spawn a few quests. Instead it was more of a lark: a lot of goofiness, some great gags and some speech checks.

It was nice to just move through an area and only get shot occasionally, and rarely on purpose. I do think that they missed an opportunity: the bowling alley really should have been candlepins.