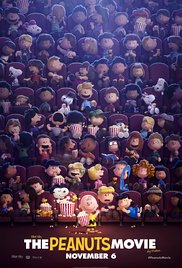 “The Peanuts Movie” on IMDB

I’ve got a soft spot for “The Peanuts”. I’m hardly alone in that. 50 years of comics, dozens of television specials, four feature films, two dozen video games and an effectively infinite number of advertisements, tie-ins and merchandise have allowed millions to nurture their own soft spots for Charlie Brown and the gang. Thier last big screen appearance was 35 years ago; does the gang still have what it takes to put asses in seats?

To put it simply: yes. Cynics (like myself) naturally assumed that pulling the gang into the modern cinema would result in a butchered, horror show of bland animation and hackneyed pop-culture references. Perhaps Ariana Grande would play Lucy and the latest Vine star would handle Charlie Brown. It might end with Snoopy and Woodstock singing a raucous cover of “Who Let the Dogs Out”.

Happily, through what I can only assume was some minor miracle, the production maintained a surprising, unwavering respect for the source material. It protected the gang from the ravages of marketing executives and ensured that older fans wouldn’t, as is so often the case, feel betrayed by a hamfisted, empty-headed “interpretation” of a beloved property.

The movie begins with a new girl, a little red-haired girl, moving into the neighborhood. Charlie Brown is, obviously, instantly infatuated and, with the questionable help of his many friends, hatches scheme after scheme to gain her attention. These revolve around Peanuts favorites like kite-flying, beagle-assisted talent shows and school dances.

The Little Red-haired Girl is one area where the production’s strict adherence to the source material causes a minor, but persistent issue. While the character never appeared in the comics themselves, she has appeared, mute, in previous films and TV specials. She’s never been given a definitive look and the name she was given in 1977, “Heather”, is never used.

While the film goes further than ever before in humanizing the Little Red-haired Girl – even giving her a (very small) speaking role for the first time, it falls far short of actually doing so. She may, in fact, be the most objectified female in media history. It’s difficult to hold this against the film when considering the history of the character, yet it does nag.

The rest of the movie is fleshed out with other comfortable, well-trod areas of “Peanuts” lore. Snoopy hunts his nemesis, the Red Baron, as the World War I Flying Ace. Lucy doles out psychiatric advice for nickels. Linus waxes eloquently on life. Sally chases Linus, Lucy chases Schroder and Marcy chases Peppermint Patty. The gags are worn but classic. Old fans may smile mostly from nostalgia, but they’ll still smile.

The wonderful, cut-paper style of animation fits the comic perfectly; treading a warm line between old-fashioned and modern. The forced 2D perspective does create moments of visual confusion, but works so well overall that these small problems are happily ignored. The quality of the voice acting is even more impressive considering that the cast is made up of mostly unknown, age-appropriate child actors.

This is a winner. It lovingly introduces the gang to a new generation and reintroduces them to those of us that may have taken them for granted. It’s a wonderful addition to the world of “Peanuts” and will likely be shown every year for the rest of our lives.