In the late 1970’s three friends, Sam Raimi [IMDB], Rob Tapert [IMDB] and Bruce Campbell [IMDB] were 20-somethings desperately trying to avoid mediocre lives. Nurturing life-long interests in film, they decided to pool their resources – all $1600 of them – and spent a weekend making a short horror film.

There will be spoilers ahead.

Raimi and Campbell had produced a short comedy, “It’s Murder!” [IMDB], the year before, but decided that horror would be more lucrative. They studied low-budget horror, cataloged what worked and produced the seven-minute short “Clockwork” [IMDB] as an experiment. Pleased with the result, they then moved on to the 30-minute “Within the Woods” [IMDB], designed as a prototype, to prove their skill to potential investors.

Raimi convinced a local theater owner to screen the film alongside more popular offerings. Despite problems with film transfers (Raimi shot the movie with 8mm film, which he was familiar with, then later had the prints “blown-up” to 35mm for theater use) and distribution issues, the film garnered positive attention. The group was able to raise the money to rework their ideas into a full-length feature. 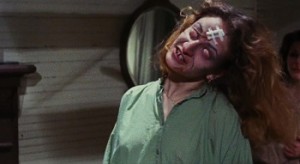 Based in part on the story of “Within the Woods“, the first Evil Dead feature promoted Campbell into the lead role and replaced the affronted spirits of an Indian burial ground with a Lovecraftian artifact: an ancient book that caused demonic possession. It was shot on a shoestring budget and is legendary for the terrible conditions that its cast and crew suffered while filming.

Five friends head out to an isolated cabin in the Tennessee woods for spring break. There, they find a cache of ancient Sumerian artifacts, including the disturbing Naturom Demonto (“Book of the Dead”), and the research materials of the professor who was studying them. When a tape of the professor reading incantations from the book is played, demons are released and begin tormenting the group.

The movie is an amazing mash of ridiculous amateurishness and pure genius. Much of the action is shot with confusing, quick cuts that fail to mesh. Characters react to close friends screaming off camera with sheepish befuddlement. Many of the homemade effects are laugh-out-loud bad.

Yet, as much due to the budget as in spite of it, the movie remains remarkably effective to this day. The unsettling “Unseen Force” (essentially two guys running dangerously through the swamp with a camera) worked so well because it remained unseen. The effects may have been bad, but they were clever and fun and the pacing never allowed the audience to dwell on them. The infamous sequence where a young girl is violated by the forest itself remains intensely disturbing.

A straight horror film, the movie features clear precursors to the genre-bending elements that Raimi and Campbell would perfect over the following two films. 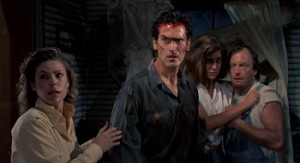 The success of the first film provided Raimi with the resources and freedom to expand upon his ideas. The budget was still small, but could no longer be called “shoestring”. It was here that he first invested heavily in the series trademarked brand of Three-Stooges inspired horror-slapstick.

The film begins with an abridged, highly-simplified recap of the first film focusing on Campbell’s character, Ash Williams. The original group of five friends is eliminated in favor of Ash and his girlfriend, Linda (Denise Bixler [IMDB]). They’ve snuck away to an abandoned cabin for a romantic weekend. The cabin strikes back. Ash is tortured by the freed demons and forced to kill Linda, leaving him, again, the sole survivor.

The Naturom Demonto becomes the more familiar Necronomicon Ex-Mortis, which was being translated by a professor and his wife. When their daughter comes looking for them with her boyfriend and their guides, they find Ash and assume he’s killed the couple.

The effects are still a bottom-shelf mixture of stop-motion, puppeteering, fake blood and fishing line. They’re also wonderfully inventive and so twistedly over-the-top that only the most jaded horror fan would dwell on their faults.

Most importantly, this is the movie where Campbell comes into his own. His blood-splattered antics turn the first act into a one-man show of dismembered hilarity. The schtick that would make Ash a cult favorite originated here. His slapstick self-attacks and backflips. His first “gearing up” montage where he adopts his chainsaw hand and shotgun shoulder holster. When he says “groovy” for the very first time.

Leading directly from the hook of the last movie, this follows Ash hundreds of years into the past where he must again fight the powers of the Necronomicon and the army of evil Deadites that it raises against him. It’s the movie that enshrined Bruce Campbell as the coolest person ever to walk the Earth.

Raimi had proven his ability to rein in his more oddball inclinations and deliver a solid story with Darkman [IMDB] in 1990. Campbell was cementing himself as the king of B-movie schlock but had expanded into writing, directing and producing. They had earned enough clout and respect to ensure that the third chapter in their ragtag franchise would be everything they wanted it to be.

Sent back to 1300 AD, Ash is initially seen as an enemy to an embattled Lord and his remaining vassals. They soon realize that he is the hero of prophecy that they’ve been waiting for. They send him on a quest to retrieve the Necronomicon so that they can put an end to the evil attacking their land. Things don’t go well.

Although the impact of the larger budget is obvious in every scene, Raimi wisely maintained a low-budget sensibility for the effects. They’re perfectly terrible. The budget paid for better actors, better sets and better costumes which are hilariously contrasted to platoons of plastic skeletons manipulated by fishing wire.

Ash’s character solidified. His bravado, hinted at in the second film, blossomed into complete egotism. His lines are legendary. “Hail to the king, baby.” “Give me some sugar.” “Good. Bad. I’m the guy with the gun.” Importantly, he was also softened; his ego creating as many problems as it solved. Ash became the absolute coolest bumbling idiot that you’d ever live to see.

Campbell and Raimi both hinted at another sequel, although this never materialized. The franchise lived on through regular comics series and a collection of video games. The film series was exhumed with Fede Alvarez’s [IMDB] 2013 remake, “Evil Dead” [My Review] starring a new character, Mia (played by Jane Levy [IMDB]) rather than Ash. I had problems with the movie (actually, one very specific problem), but was still pleased with the attention it gave to the franchise.

Campbell and Alvarez have gone on record stating that the new movie wasn’t, in fact, a remake, but a stand-alone story. Rumors circulated that Raimi would produce “Army of Darkness 2” and Alvarez would produce “Evil Dead 2” and a seventh film would eventually unite Ash and Mia storylines. While the ultimate truth of these rumors is unknown, Raimi and Campbell have already taken Ash in a new direction: television.

The first, 10 episode season of “Ash vs Evil Dead” [IMDB] completed in January. The series, essentially a 30 minute horror sitcom, is set 30 years after the original trilogy. It features Ash and friends traveling the country searching for a way to stop the resurgent evil of the Necronomicon. It’s also damn near perfect in every conceivable way.

The half-hour, full season format suits the Evil Dead incredibly well. The series has, in fact, garnered more critical acclaim than any of the films. The show has already been renewed for a second season so we’re ensured of plenty more Ash for the foreseeable future.