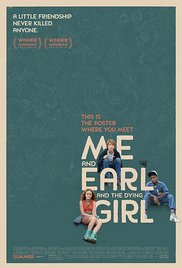 “Me and Earl and the Dying Girl” on IMDB

The gimmicks are familiar. There are clever, sardonic title cards introducing each section. The cinematography leans heavily on unorthodox, often stationary, wide camera angles. Camera positioning is often very low or behind the observing character. The narration breaks the fourth wall to include the audience directly in the story. The story is interspersed with the odd animations required by law of quirky indie comedy/drama.

The gimmicks are familiar, but well used. You’ll find yourself easily and comfortably adopting exactly the attitudes the movie needs to succeed. Greg (Thomas Mann [IMDB], an unlicensed Matthew Modine [IMDB] clone) is the titular “Me”. He’s a high-school commitment-phobe who’s enjoyed a nearly invisible existence. Rachel (Olivia Cooke [IMDB]) is the Dying Girl. She’s been diagnosed with leukemia and, because they once went to hebrew school together, Greg’s mother forces him to spend time with her.

Greg’s “co-worker” (as he’s afraid of admitting to a friendship), Earl (RJ Cyler [IMDB]), is a black kid from the “wrong side of town”. He’s the most enigmatic, least seen of the group and half his lines include the word “titties”. We spend very little time with the character, which affords him literally no growth. He’s used, essentially, as punctuation: helpful to the sentence, but little seen and rarely essential for understanding.

Greg and Earl make silly parodies of classic movies after being introduced to them by Greg’s eccentric father (the always enjoyable Nick Offerman [IMDB]). Over Greg’s objections, Earl shares them with Rachel and she becomes a fan. Greg’s life is further muddled by “the pretty girl”, Madison (Katherine Hughes [IMDB]), who convinces him to create a movie for Rachel.

All of these threads progress over a several month period. Rachel suffers through her treatments, Earl and Greg continue make their films, and Greg is confused by Madison. The characters are well drawn and acted, but their relationships are hampered by the meandering script and uncertain motivations.

Despite this, the core emotional needs of the characters are clear and, via powerful performances, compelling. It’s an effective movie, even if it’s not quite as smart as it thinks it is. Intellectually, there are annoyingly obvious plot holes and missed opportunities. Emotionally, you’ll be weeping like a schoolgirl.