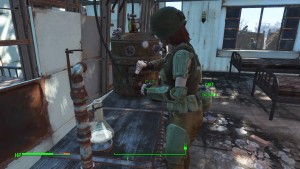 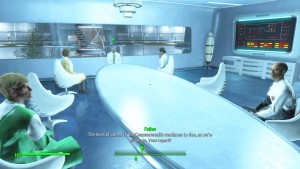 My report is that we have no reason to care about this.

In the last part, I lamented how the factions we’d been presented with so far were being pitched as adversarial, yet seemed to have more than enough common ground to make a worthwhile peace. Now we’ve added a fourth: the Institute, run by “Father”; A.K.A., my old-man son, Shaun. After working with them all day I can say one thing with certainty: they don’t know what the @#$% they’re doing either.

The Institute really is doing everything they’ve been accused of. They’ve been replacing people with synths, they’ve been sending teams of armed Gen 1’s to the surface, and they’ve been kidnapping people. Yet, in all my time with them, I’ve never gotten a reason for it. 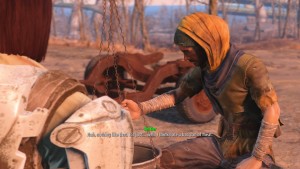 OKay, this dude has the runs. That might become an issue for us.

The facility itself is, we’re told, completely self-sufficient. It needs nothing from the surface with the rare exception of some piece of technology or research. Nothing that would require the dozens of synth death squads that I’ve faced. Nothing that would necessitate the risk of creating such enmity with the locals.

They also dislike the Railroad, but again, the reasoning is odd. The Institute doesn’t consider the synths sentient (and, for a strictly scientific community seems bizarrely close-minded on the topic) and feel the Railroad is causing trouble.

More importantly, my old-man son’s – who in a not-at-all-cliched way is dying – end goal in all of this is to have me take over The Institute. That’s his end game. So really, why am I not suspending the infiltration synths, offering Gen 1’s to local communities as guards, opening up relations with the Brotherhood of Steel and enjoying a brighter God-damned tomorrow?! 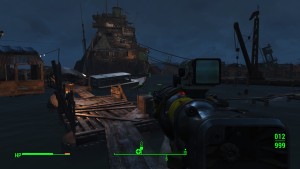 I ended last time accepting a mission from Father to recover a rogue synth. He had gathered a following of raiders and taken over the Nahant Wharf area and, specifically, the wreck of the ship Libertalia. To assist, he assigned me a courser companion, X6-88, to meet me. Things started out rough as the Brotherhood of Steel was nearby and weren’t fans of my friend.

I stayed out of it, but it turned into something of a comedy as they’d knock him out, start to wander away and then he’d get up and start the whole mess over again. Eventually it got sorted and we took the raider base. I resolved the situation as instructed, by disabling the synth, and X6-88 took him away. I used the opportunity to make the rounds and catch up on some visits. 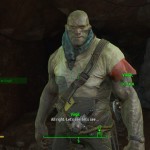 I brought Virgil his serum. 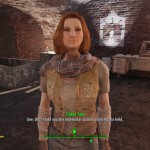 I visited Desdemona and let her know that I wasn’t dead. 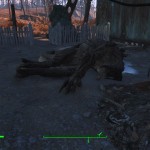 I stopped home to dump some gear and found a dead deathclaw on the doorstep.

Desdemona asked that I continue to work with The Institute, so I returned to Father to accept my reward and take on more work. While there I touched base with Patriot. We began planning for a plot to free over a dozen synths. At the same time, behind his back, I began planning with the synths directly to plan a violent rebellion that would free all the synths. Again, I’m forced to wonder why we should bother if I’ll just be in charge soon, but those are the options the game offers. 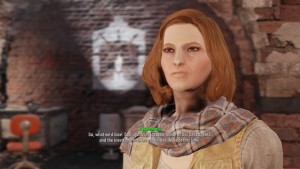 The Railroad was all about drawing lines.

Father told to go to Bunker Hill. He had intel that four synths were being held there by the Railroad and he wanted them reclaimed or destroyed. He sent a courser ahead to meet me. I had the option of informing either the Railroad or the Brotherhood of Steel (or neither). I choose to inform the Railroad and decided to set up an ambush for the Institute.

I met the courser a few blocks away from the settlement, but I was late and he got hinky. He started to call for help and we were alone, so I shot him. Despite this, he had gotten his message off. Entering the settlement there was a massive three-way battle between the Railroad, the Brotherhood and the Institute. 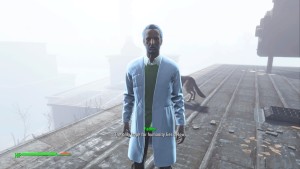 My son, Father, is letting his fanatical side-show.

This was an amazingly confusing, utterly broken mission. Nobody was hostile to me, but I decided to help out and pick off the Institute synths. I didn’t open fire on the Railroad or the Brotherhood, yet all of the (presumably Railroad) turrets in the area became hostile to me permanently. Soldiers from all sides would just stop and stand still, not reacting to anybody. Reaching the synths, I… had no idea what to do. I just left, which seemed to be enough to end this terribly confusing mission.

Returning to the Institute, I found Father (after following a very annoying map marker) on the roof of the old C.I.T. building. He was more than a little pissed off that his surgical strike ended in a bloodbath. 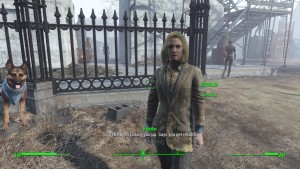 I returned to Bunker Hill to see how they had recovered and spoke to Kessler, their leader. She asked for help with a group of raiders and I gave it. I figured it was the least I could do. Returning to inform her of my success, she gave me the “keys to the kingdom”, so to speak, and dumped another settlement in my lap.

I teleported back to the Institute and went to a directorship meeting where my old-man son announced that he was dying and wanted me to take over. The news went over about as well as could be expected. I also met up with my synth friend. He was willing to arrange the synth rebellion, but was worried about equipping them. He asked me to destroy the synths guarding a digging crew, which would allow them the time to modify the construction equipment into weapons. 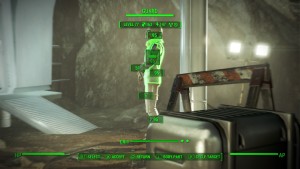 These guards were tough.

This ended up being one of the tougher fights I’ve had. I had upped the difficulty to “Very Hard” some time ago, but was still breezing through most of the battles. The difficulties of the enemies, along with the tight quarters, upped the challenge here considerably.

Returning to Father with my most innocent face, he informed me that the Institute was struggling to activate a new nuclear reactor, one that would power them for centuries to come. To accelerate the process, he requested that I take their engineer, Allie Filmore, to the Mass Fusion building to retrieve a “Beryllium Agitator”. As we approached the teleporter, I was warned that doing this would make the Brotherhood of Steel permanently hostile. I don’t know how they knew, but there it was. 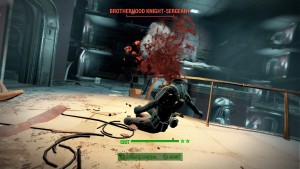 I think the Brotherhood has unfriended me.

I took the plunge.

We hit the building and my new allegiance was immediately put to the test. I began slaughtering Brotherhood of Steel soldiers; by the dozen. I thought we were home free when we reached the reactor level, but fiddling with it released multiple sentry bots and assaultrons. Things got messy.

Returning the part to the Institute, I walked into a problem: the heads of the Bioscience division had barricaded themselves in the hydroponics lab to protest my leadership of the Institute. I was able to circumvent their defenses and, because I’m a sweetheart, decided not to murder them for their opinions. 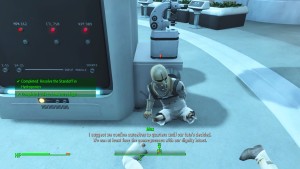 I did dismember all their synths. They were just being annoying.

Finally, Father asked me to mitigate a stand-off between an Institute team and the Minutemen outside Greygarden. Turns out that a local scientist had impressed the Institute so much that they wanted to kidnap him in the middle of the night. This, it seemed, was the kind of thing that I could address as leader.

I convinced all involved that the entire thing was just a misunderstanding. Once he was asked nicely, the candidate was willing to go live in a virtual utopia devoid of giant insects. Go figure.

Father wanted to make a statement about the new reactor, so asked me to boost the transmitter power of Diamond City radio and pre-record a message to be sent to the Commonwealth. I tried to be upbeat about it. We then had a lovely ceremony to activate the reactor and I ran my first directorship meeting. 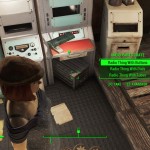 I don’t think they’d be talking be down to me if I were a man. 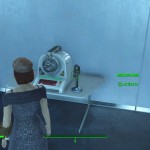 “10-and-a-half score years ago, our forefathers blew the ever-loving shit out of everything…” 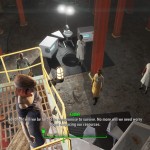 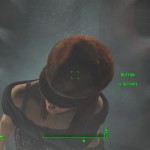 Why can’t I build one of these nifty rad-eliminating shower? 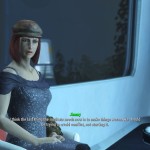 I’m starting to make a difference! 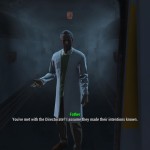 Following this, I had a very strange conversation with Father. He wants me to destroy the Railroad because, in his words, “they seek to undermine everything the Institute stands for!” Which is  weird, because the ONLY thing that the Railroad stands for is freedom for sentient synths. Is he saying that the entire Institute is based, soup-to-nuts, on the creation of a slave class? Really?

Game, it’s getting pretty damn stupid up in here…