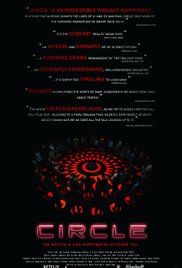 You regain consciousness, already standing, on a pale patch of red light. The edges of the room recede into darkness. You see many others, arranged with you in a circle around an ominous orb in the floor. One of them takes a step and the central orb flashes to life, knocking them to the ground. An unseen force drags away the body.

This is a high-concept sci-fi thriller in which 50 random people wake up in a circle. Every two minutes one of them will die. They quickly realize that they can control who the next victim will be through an anonymous vote. They hope the last person left will win this terrible game and will be allowed to live. How will they decide who dies? Age? Race? Contribution? Potential? Do societal norms apply? Can they?

These areas are explored as the characters, intentionally or accidentally, reveal information about themselves. A few try to lead, others plead and some bully. Experiments are suggested. Lies are told and eventually, uncovered. Factions are formed and loyalties tested. You’ll likely not agree with many of the decisions being made, but all of them are understandable given the circumstances.

The movie was clearly filmed on a shoestring budget. This may have helped in one important way: most of the actors are unknowns. It prevents the audience from forming assumptions based on marquee popularity. For all their relative anonymity, the actors provide solid, believable performances.

Like most examples of the genre, the movie starts stronger and better than it ends. There are definitely revelations that will frustrate the thinkers in the audience. It’s a minor complaint. The ending may be problematic, but it’s also very short and easy to ignore.

Despite its minimalism, the movie maintains interest and a surprisingly engaging pace. You’ll need to plan for post-viewing discussion time for this one. It successfully encourages its audience to consider how they value others and, more directly, how they value themselves.