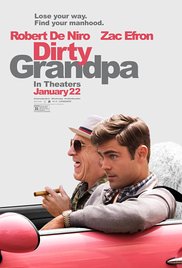 A young man is on a path that he wouldn’t have chosen for himself. His passion for photography was abandoned to become a lawyer and follow in his father’s footsteps. His fiancée is controlling and demanding. He’s lost his way. If only there was a crazy old man who could slap him out of his complacency!

Dick’s wife of 40 years has recently died after a prolonged bout with cancer. He asked Jason to drive him from Georgia to his summer home in Florida. The two were very close when Jason was younger, but have grown apart. Dick hopes this will bring them closer together and force Jason to reexamine his choices.

The premise is tried and true and usually fairly easy to pull off. Basically, you shovel in whatever you like as long as you pause every once in a while for an emotional moment. Crazy things happen, other crazy things follow and somehow, despite them, our hero finds true love and an appreciation for the good things in life.

The story simply doesn’t flow naturally. For example, as expected, the straight-laced Jason ultimately ends up screamingly drunk. He does drugs. He goes wild. He pays for it. Days later, he finds Grandpa smoking weed and says, “Grandpa! That’s a gateway drug!” It feels like the script was dropped and shuffled back together in the wrong order.

De Niro and Efron have a likable, genuine chemistry when it’s allowed to show. Unfortunately much of the script contrives to have them apart from one another for long segments. This makes the few, often contradictory attempts, for them to bond emotionally feel even more false.

This should have been a simple, forgettable romp carried by charm and cliché. Instead it’s a sad waste of De Niro’s significant talent and definite step backwards for Efron. There are a few laughs, of course, but they’re shallow and soulless.