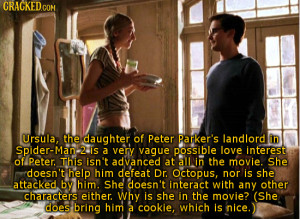 I’m a big fan of Cracked.com’s special brand of fact-based listicle’s. Their regular feature, Photoplasty, takes reader submissions on a variety of topics. One from last year, “23 Movie & TV Subplots That Were A Total Waste Of Your Time” surfaced recently on my Facebook feed and the entry to the left caught my eye.

Submitted by reader “Comunacho”, the post dealt with a scene in 2004’s Spider-Man 2 [IMDB]. Tobey Maguire’s [IMDB] Peter Parker has been suffering a crisis of identity, unable to reconcile the life he wants with the responsibility his powers force upon him. The scene begins with him asking himself, “Am I not supposed to have what I want? What I need? What am I supposed to do?”

Mageina Tovah [IMDB] plays Ursula, the gawky, sweet daughter of Peter’s overbearing landlord. It’s a small role, one that Tovah plays beautifully. Ursula knocks on his door offers him a piece of chocolate cake (and a glass of milk). They share quiet a moment alone, eating cake in the dingy apartment.

It’s quiet and subtle, but this is the most powerful scene in a film riddled with powerful scenes. Here it is, in case you’ve forgotten:

This scene was never meant to introduce Ursula as a secondary love interest or to serve an abandoned side-plot. It’s self-contained and important. This is about Peter Parker, the person, receiving a simple, unexpected act of human kindness. Not Spiderman, the hero. Not as payment or thanks, but simply because a sweet girl thought he might like a piece of cake.

Smartly, it’s never expounded upon further, but the implication is clear. The gesture crystallizes Peter’s thoughts: if you can do good, then you should do good. Whether that’s saving the city from a madman or bringing a piece of cake to the boy next door because he’s seemed down lately.

Peter’s heart would always be Mary Jane’s, but at that moment Ursula had the audience. We loved her because she was doing what we couldn’t. Peter has sacrificed and fought. He deserves to have everything he wants. A piece of cake and a quiet moment may have been the very least that could be done, yet it was exactly what was needed.

The movie would reinforce the theme in the following scenes with Aunt May and Spider-Man’s selfless rescue of the commuter train, but never would it be boiled down so simply and beautifully as this. Comunacho, I’m sorry, but I think you missed the point.